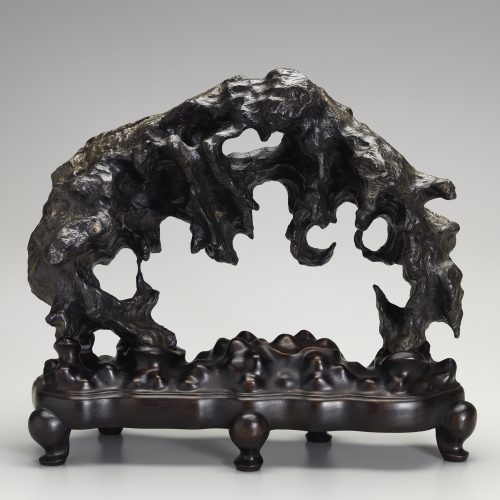 This rock appears to have heaved up on it haunches when it was formed. It is a downward facing C-shape, horizontally aligned, intended to be seen from one side, and composed of crags, hooks, peaks, nooks and three perforations. The stone is dark blackish-brown with orangish to buff colored streaming. The surface is shiny, looks slippery and catches the light as if it were covered with oil. As with related lingbi stones, this rock has a ring tone when struck.

Rocks are about nature, but in China they are also about imagination, about escape, and, placed on the perfect stand, they enter the world of art. Not representational art. Not abstract art. Rocks or stones are what they are. Substance, volume and weight, shape and color, surface and texture. Their physical characteristics translate into nobility, into beauty, in the eyes of the beholder. Historically that was the Chinese scholar who pursued, collected, and regaled in the presence of his gongshi, “spirit stones.”

Qilianshan, Qilian Mountain, located in northwestern Gansu province was the source of a variety of limestones that served to fulfill this pursuit. These rocks included those of black color with subtle orange and brown inclusions as if caramel had been shot through the stone. Further the stones exhibit distinctive wrinkles often in the form of concentric stepped circles and sometimes with small excrescences or nodules appearing like beads on the surface, all characteristics of the present rock. During the 17th century when the great popularity of lingbi limestone lead to its scarcity, an example here similar in form to the present rock (fig. 1), Qilian stone was discovered to be a suitable replacement but also came to be appreciated in its own right. It should be noted that rocks collected from nature could be and often were enhanced or prompted into a clearer, more distinct form through drilling, assembling, and polishing, sometimes leaving tool marks behind. Although no tool marks are visible here, the form suggests the intervention of an artist or craftsman.

One special quality attributed to spirit stones, in the West more commonly referred to as “scholars’ rocks,” was their ability to project and to suggest something beyond their own intrinsic being. In this respect, they almost function as Rorschach tests. Beyond the Qilian rock persona, what do you see? Rearing creatures colliding head on? A bat cave? A magical gateway? A bridge? If rocks do represent something, that something is in the eyes and mind of the beholder. Many rocks are perceived as invitations to journeys. A small desk rock or one perched on its stand on the floor of a study offer escape into terrains traversed by the eye and mind, across smooth plains, into dark grottoes, along narrow paths, where trees and fungus grow and streams flow, in spirit.

Rocks similar to the present were collected by Robert Rosenblum, whom we thought of in his lifetime as the Rock Whisperer, and who in death continues to inspire us (figs. 2-3). The rocks are dated by Robert Mowry to the 17th and 17-18th century, indicating when they were collected.

The stand is similar to a number of Rosenblum’s Jiangnan-style carved wooden supports and one in particular (fig. 4). The two are horizontal in orientation, worked to conform with the bases of the rocks they support, the upper surfaces carved with low, rounded outcroppings or wave-like peaks, the vertical sides or skirts undecorated and each supported on six-cabriole legs. This distinctive upper surface design is not atypical but is especially congruent with the form of the present stone. 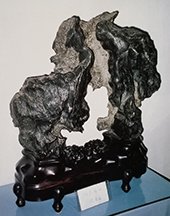 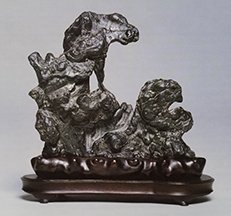 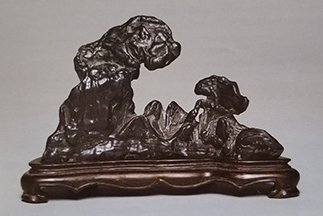 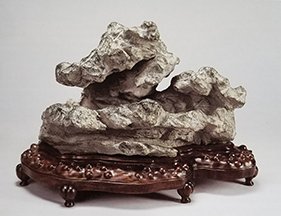