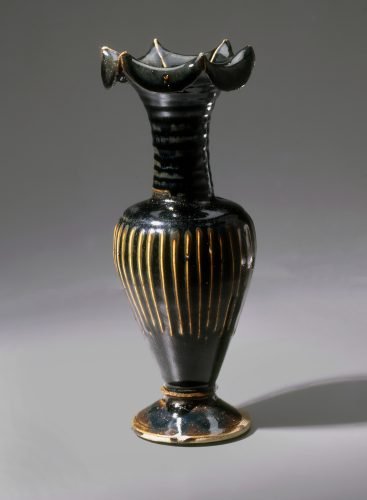 The body of the grey stoneware, rather coarse in texture, rises from a widely splayed conical foot and slightly concave base to high shoulders and a horizontally-grooved trumpet-shaped neck flaring at the rim into a series of peaks and undulations. Vertical lines or ribs appearing pale caramel in color are closely aligned next to one another on the body, an intentional result of the glaze sliding back from the raised white slip trailed on the body before glazing and firing; further ribs begin at the tip of each point of the mouth rim and trail down the interior of the neck. The bright, sleek glaze ranges in appearance from deep black, where thick, to a pale caramel where thin and covers all but the base and interior below the mid-neck area.

The contrasts and surprises–the shifting lines of the profile, the taut white line against the sea of supple black–produce a vessel of most compelling effect. This intriguing shape was produced at major kiln sites during the Song, Jin, and Yuan dynasties including white-ribbed black pieces like the present.1 The intriguing shape also occurs in celadon from Yaozhou, in Jun ware and in the painted stonewares produced at Cizhou and related kilns.2

Kiln site and tomb finds of the white-ribbed, black-glazed stonewares point to a Song-Jin time frame for their production at a surprisingly large number of kilns in Henan, Hebei and Shandong provinces. An analysis of these finds leads to the suggestion that the present vessel–given its body type, the arrangement of the white slip ribs, and the style of glaze application–was produced at a kiln in Shandong.3