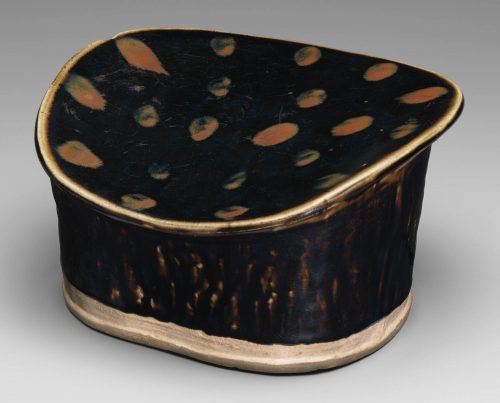 This unusual pillow is of bean shape with a slightly dished headrest tilting forward. The sides steeply rise from the ledged base and are molded with a shallow design that appears to be floral in nature. A thick, lustrous, black glaze covers the pillow thinning to a mushroom color on the overhanging edge. The headrest is decorated with large dabs of iron-brown the size of thumb prints. The molded design which wraps entirely around the sides of the pillow is blanketed by the generous thick glaze which stops in a line above the ledge at the base. Two small circular holes are pierced through the unglazed base where the fine-grained and compact greyish-white stoneware is visible.

Ceramic pillows were extremely fashionable during the Song, Jin and Yuan dynasties and were produced at numerous kilns throughout China. Kilns specializing in Cizhou-type slip-decorated wares in the north were the most prolific producers of pillows, obviously appealing to a very wide market and one that did not depend at all upon export, except within China itself. The efficacy of shape, as in the case of tiger pillows for example, and the significance of decoration, due either to the auspiciousness of the subject matter or the sheer attractiveness of the design, made the Cizhou centers, which specialized in vast varieties of decorative techniques and pictorial subjects, naturals in this realm of production. At other major production sites, such as those producing Jun wares, Northern Celadons or white wares, for example, pillows were much rarer commodities. The type represented here can be categorized among these rarities; only a handful appear to have been published to date.

Only three comparable black-glazed, iron decorated, bean-shaped pillows appear to have been published. The pillow formerly in the Edward T. Chow collection and now in the Meiyintang collection is almost identical to the present, although the example in the Kwan collection and one excavated in Shanxi province are also very close in shape and style.1 The pillow from Shanxi, with its striking white body, quite similar to the present, might have been made at one of the kilns in Shanxi known to have imitated the highly-lauded and desirable wares of Hebei’s Ding kilns or it could have been an import from Hebei, where the Ding kilns are known to have produced superb white-bodied, black-glazed wares, sometimes with the addition of rust-brown decor. The same assessment might be applied to the present pillow.