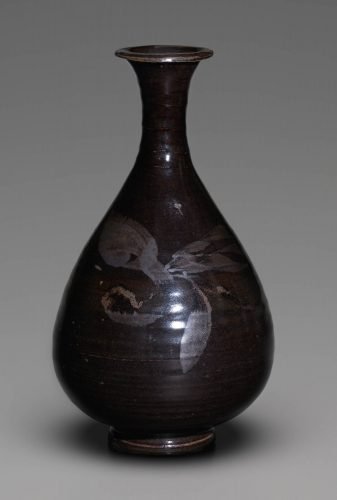 The bottle is of pear shape with finger-grooved sides rising to a narrow neck with flared lip and supported on a thick knife-cut foot. A lustrous black glaze covers the bottle inside and out. An image which might be interpreted as a large bird in flight with tail fanned out, wings outstretched and neck arched below is painted on the back and front The ghostly decor was brushed on in a calligraphic flourish and ranges from a silvery hue to slight russet in color. The images, with their blurred edges, appear softer and more matte than the hard bright look of the reflective glaze and seem to shimmer and float cloud-like in the black matrix of the glaze. The dense, smooth-textured, buff-colored stoneware body is revealed on the unglazed flat foot ring and the deeply recessed base.

The beauty of these bottles rests in their proportions, the depth of the glaze color and the compelling nature of the painting. A stunning example from a private collection, now in a museum in China, is decorated with a classic lotus design in russet brown and is ascribed to the Cizhou kilns in Hebei province.1 A bottle in the British Museum, one of the most fully decorated of this type of bottle, displays a russet-colored design of fan-tailed birds that combine with a leafy vine.2 A bottle excavated in 1983 at Xuecun in Liulinxian in Shaanxi is described as having a floral design; it displays a rougher and darker colored body than the classic Cizhou type and is likely a product of Shanxi province and is attributed in one source to the Yuan and in another to the Jin dynasty.3 A bottle with a clearly recognizable bird design in the Arthur M. Sackler Collection was ascribed to the late 12th-first half of the 13th century in the Jin dynasty by Robert Mowry.4 Two black bottles were excavated from a Jin tomb in Datong, Shanxi province from a tomb datable to 1164.5 What might be the latest published bottle is datable to 1341 of the Yuan dynasty.6 A bottle in the Art Institute of Chicago is very similar to the present in design and in the silvery color of the painting and is also attributed by the Institute to the Yuan dynasty.