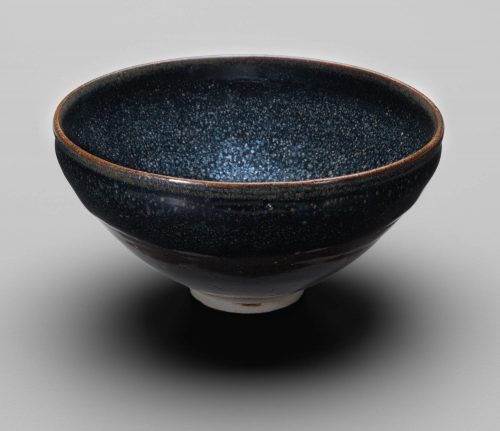 Of rather large size, the deep bowl rises from a small square-cut foot ring to the indented rim. The glaze on the interior appears as a bluish-black color but brownish where it has drained back from the lip, where it has become thinner and more translucent. On the exterior two layers of glaze are evident, the lower sheet appearing brownish in color where it streams towards the foot and a top coat producing a darker color and a thick roll where it stops. The unglazed lower portion of the body, foot, and recessed base reveal the light grey stoneware body. On the interior the glaze glistens with silvery brown “oil spots” heavily concentrated on one side, while the effect is fainter on the exterior.

Even though the northern kilns were not privy to the iron-rich clays which gave the Jian bowls their characteristic heavy, black stoneware bodies, the potters there were able to emulate the distinctive glaze effects and very successfully the “oil-spot” effect as seen on the present bowl. The northern potters might cover the lighter bodies of their unfired vessels with an iron-rich slip in order to imitate the look of the southern Jian wares true charcoal or black-colored bodies.1 The present bowl is simply glazed with two layers on the exterior, allowing exposure of the light color of its body below the glaze as are a good number of extant tea bowls, some attributed to the Lifeng kilns in Henan province.2 Neither were pretending to be Jian bowls but their success was assured by the splendid effect of their “oil-spot” glazes. This effect was likely the result of yet a third layer of glaze with high iron concentration which resulted, after firing and cooling, in the precipitation of iron crystals on the surface, producing the tiny sparkling islands of silver.3 Oil-spot tea bowls (along with bowls imitating the hare’s-fur glaze effect of Jian wares) were discovered at several kilns in the north including the Guantai kiln site in Henan province and the Huairen kiln site in Shanxi.4