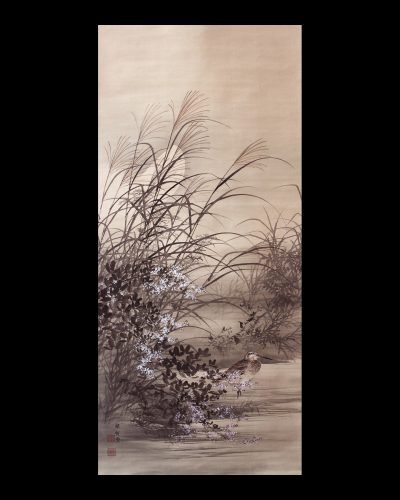 “Snipe in River Beneath Autumn Grasses
in Moonlight”
1894 月下秋草河鴫圖

Box inscription by Bairei:
“During the twelfth month of the year 1894 during the Meiji era, painted on the bank of the Sanju River at Seika-zenshitsu by Omu-inshi.”

Kono Bairei was born in 1844 and died in the twenty-eighth year of Meiji,1895. The present painting was done, according to Bairei’s own inscription on the storage box during the 12th month of the year 1894. The artist died only a few months later in 1895, making this among his very latest works.

Autumn grasses frame a rising moon in the background, while the snipe of the title written by Bairei recalls a poem by Priest Saigyo, collected in vol. 4 of the Shin kokin wakashu: Kokoronaki mi ni mo aware wa shirarekeri shigi tatsu sawa no aki no yugure, “Even one who claims to no longer have a heart feels this sad beauty: snipes flying up from a marsh on an evening in autumn.” Saigo composed his poem on his way to the northeast and anyone who reads it can easily experience the loneliness of an autumn evening in the countryside, especially someone such as Bairei who spent most of his life in the city. Well-versed through his teachers in the styles of the Maruyama, Shijoo and Nanga schools of painting, he was also, like his contemporaries, taken by Western approaches to painting and thus a new verisimilitude becomes apparent in their works. Although Bairei distinguished himself especially as a teacher of young artists, he also achieved considerable success in his own right on the world stage and at home in his beloved Kyoto, where he became employed by the Imperial Household. His talent and activities earned him a highly honored place among the founders of modern Japanese painting.