Inscription:
A copy of the inscription on Wen Zhengming’s 1534 painting of the “Red Cliff” including a trasnscription of Su Shi’s prose-poem,” followed below by “Painted by Yo Shukuya.”

The great Northern Song literati par excellence Su Shi (1037-1101) commemorated his autumn boating excursion to the site of an historic Han dynasty battle in the now iconic prose poem, the Chibi fu, “Ode to the Red Cliff.”1 Artists almost immediately gave visual form to the excursion memorialized in the ode and by the time of the Ming dynasty, Wen Zhengming (1470-1559), distinguished heir to the Song literati tradition, represented the theme on numerous occasions during a long and very productive career. The Japanese painter, Aoki Shukuya, based his present painting on such a work by Wen Zhengming, one dated to 1534, as indicated in Shukuya’s rendition not only of Wen’s painting but in his copy of Wen’s inscription. Both Wen and the artist of the present picture were fine calligraphers as well as painters and both also wrote out the complete original prose-poem by Su Shi.

While the 1534 painting that inspired Shukuya might no longer be extant, a painting of the subject by Wen dated to 1558 (fig.1) gives some indication of Wen’s approach to the subject. The compositions of the Japanese and Chinese paintings are indeed similar. The boat, where Su is pictured with his travel companions, functions as a pictorial fulcrum between small foreground bank and the cliff towering above. However, Shukuya’s painting is characterized by abstract pictorial patterns and a rather formalized composition. In addition, the closer viewpoint of the Japanese painting creates a more intimate scene, one in which extreme delicacy of color, line and form serve to transport the image to the rarefied realm of poetry.

Shukuya was born in Ise perhaps of Korean parents and used their surname, Yo, until his adoption by the Aoki family of Kyoto. There he was introduced to Ike Taiga (1723-1776), his teacher and a source of profound influence over the later course of his life. The present painting appears, however, to have been done early during Shukuya’s career, considering his use here of the surname Yo. Paintings such as this by Shukuya and a number also by his mentor Taiga and like-minded artists, which were based on ancient and iconic Chinese literary moments and the Chinese paintings inspired by them, illustrate to perfection the ways in which later Japanese painters could evoke far distant times and places and weave those various strands together with their own contributions to create visual fabrics rich with historical and art-historical overtones.

1. Scholars since the Ming period have taken some delight in pointing out that the actual site of the great battle was not the Red Cliff visited by Su Shi at Huanggang, to the east of Hankou, but rather the Red Cliff at Jiayouxian, to the west of Hankou. But poetry won over history, and it was at Huanggang that pavilions were built to shelter the myriad visitors enticed by the compelling imagery of Su Shi’s prose-poems. The Red Cliff poem transcribed by Wen Zhengming and Shukuya was written by Su Shi to commemorate the 1082 autumn excursion, while in early winter he wrote yet another on the same subject. 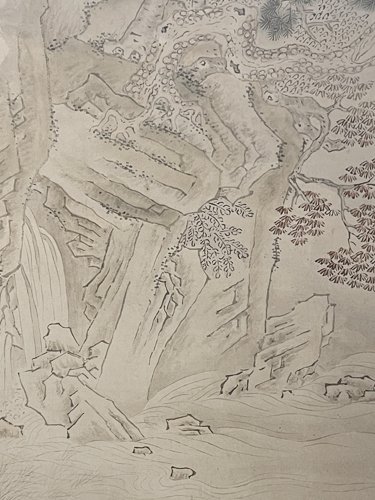 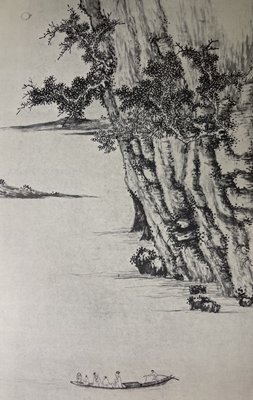