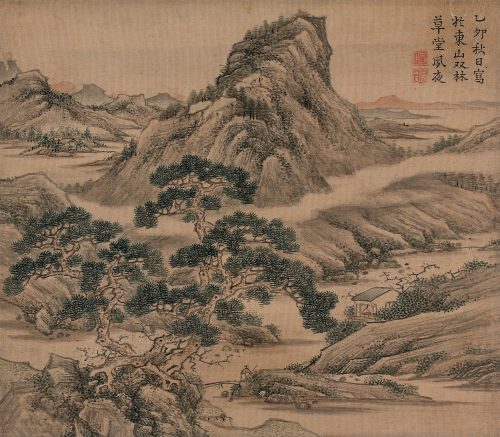 Inscription:
‘On an autumn day during the year 1795, I painted this in the Paired Tree Grass Hut on East
Mountain. Shukuya.’

A traveler with staff has just crossed a bridge beneath venerable pine trees as he makes his way to a riverside house in which a figure waits in anticipation of a visit. Clouds encircle the bases of tall peaks in the middle ground while serried ranges of peaks measure the progression to distant mountains. Noteworthy here is the strong interest in pictorial values, with technique subordinated to descriptive ends.

The artist Aoki (originally Yo) Shunmei (Toshiaki), called Shukuya, was born in Ise, perhaps of Korean parents surnamed Yo. His elder cousin Tenju (1727-1795), who was later adopted by the Nakagawa family in Kyoto, sometimes called himself Kan Tenju, the ‘Kan’ surname being derived from the Japanese name for Korea, Kankoku. Shukuya was adopted by the Aoki family in Kyoto, and was probably introduced by Tenju to his close friend Ike Taiga (1723-1776), who became Shukuya’s teacher and exerted profound influence over the later course of his life.

Like Tenju, Shukuya maintained contacts in Matsuzaka, where they both were born. The writer Hosoai Hansai wrote in the preface to Tenju’s Kishizukamei that he had met Tenju and Shukuya in Edo, where they may have gone on business on behalf of the shop Tamaruya in Matsuzaka. The avid collecting and publishing activities of the cousins may in fact have led to a decline for the business. Shukuya’s fame as a painter continued to grow, however, and in the 1782 edition of the Heian Jinbutsu-shi, his name appears together with those of Ko Fuyo (1722-1784), a close friend of Taiga, and Gyokuran (1728-1784), Taiga’s wife.

Following the death of Gyokuran in 1784, Shukuya and other pupils established a memorial hall named the Taigado in the area of Sorinji where Taiga had lived. Shukuya became the first master of the hall, calling himself Taigado 2nd, and, according to Tanomura Chikuden (1777-1835), ‘…He closed his gate and did not go out, supporting himself as a writer. He did not clear away the grass and tree-leaves and the steps and courtyard were left unswept. For more than ten years he was cut off from others as though by a screen and few people saw his face…’

Chikuden judged Shukuya’s landscape style to have been based mainly on that of Wen Cheng-ming (1470-1555) and praised the grace and elegance of his precisely applied color and controlled brushwork, concluding ‘…He profoundly achieved the ancient standards. He said himself that ‘for even a single rock or patch of water I need from five to ten days to complete it; silk and paper (from those seeking paintings) pile up on my desk, for unless I have an idea or become inspired I dare not work. I cannot live the life of selling (paintings of) mountains as practiced by the ancients.’ Thus his extant works are very rare.’

The lyric and structured expression of the present work does in fact relate to the style of Wen Cheng-ming and that of his followers in the Wu School. It would seem that Shukuya was a contemplative man, one who painted in a thoughtful and disciplined manner in which each stroke was designed to make a specific contribution to the very evocative whole.