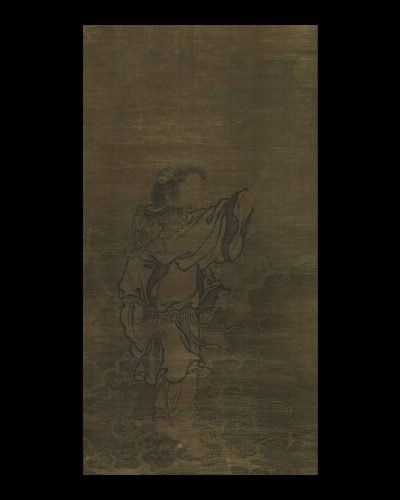 “Shide with Broom under the Moon”
月下拿帚拾得図

A figure wearing a robe with fungus tied at his waist and mantle of woven leaves rides the waves holding a broom in his left hand pointing upward with the right toward the moon. These various attributes identify the figure as Shide, whose name literally means “picked-up” or “foundling.” He is believed to have lived during the late Tang dynasty in the 9th century at the Guoqing Temple on Mount Tiantai on the coast of the China Sea. He is closely associated with the reclusive Buddhist monks Hanshan and Fenggan. It is said that Shide was an orphan taken in by Fenggan who put him to work in the kitchen of the temple, hence his attribute of a broom, and he was befriended by Hanshan, known especially through a body of poetry supposedly composed by him. Numerous anecdotal stories have come down about these eccentric figures, popularized not only in Chan (or Zen) hagiography but in painting as well. The image of Shide is often paired with that of Hanshan, less often with Fenggan, but the present painting appears complete in itself, with the figure and moon creating a nicely balanced composition .

The strong, calligraphic brushwork of the garments identifies the artist as a member of the 15th-16th century professional group of Ming artists known as the Zhe School, after Zhejiang province, home of a good number of them. One especially telling characteristic of the painting is the use of serrated lines to delineate the foreground waves, very similar to a painting of the Daoist immortal Zhongli Quan by the Ming court painter Zhao Qi (fig. 1) who was active during the Chenghua (1465-1487) and Hongzhi (1488-1505) reign-eras, likely the time when the present painting was also executed.