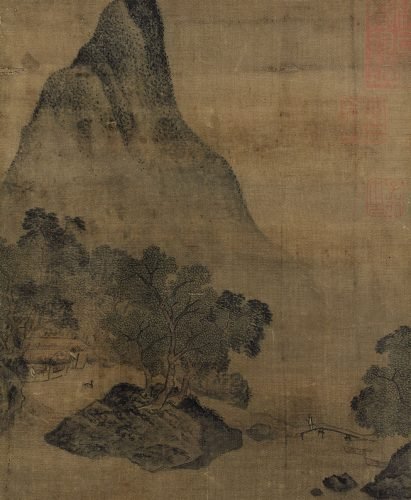 A man with staff crosses a bridge as he approaches a village complete with welcoming dog, presumably seeking the friend who appears in one of the cottages to the left. The banks of what appears to be an extensive river expanse are crowned with leafy trees, while additional shrubs and trees are indicated by short-hand dottings on the peaks rising above.

The style of the painting is a pleasant amalgam of the dottings of Mi Fu (1051-1107) and, on the foreground rocks, the ax-cut texture strokes of Li T’ang (ca. 1080-ca. 1163). Yet the closest parallels to this painting are to be found in works of the Ming era, when such village scenes occur in works by Tai Chin (1388-1462) (fig. 1) and comparable brushwork is found in paintings by Shen Chou (1427-1509) (fig. 2). Following the truism that any given painting should be dated on the basis of the latest stylistic trait it evidences, the present painting is here dated to the later 15th century. 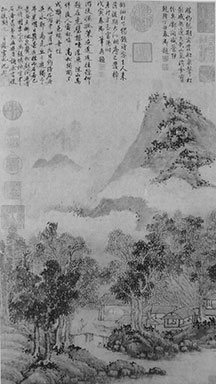