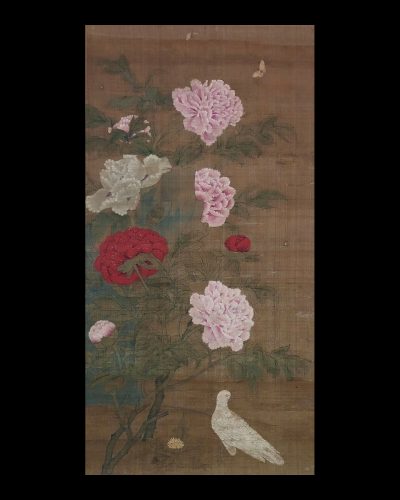 A white dove pauses on a shallow foreground embankment, its head turned back as if in contemplation of something to its right. Defining the limited space of the picture, a bluish garden rock rises in the background, its porosity indicated by large holes through which stems can be seen. Most striking are the luscious red, white and pink peony blossoms, which expand up and rightward, their massed forms being visually balanced by individually placed bees and butterflies. These last are common metaphors for young men in love, just as the peonies around which they circle represent the feminine object of their desires. The dove or pigeon symbolizes fidelity, since it is said to mate for life, an enduring relationship which is given added force here by the chrysanthemum growing nearby, its name, ju, being phonetically close to the ju meaning “to remain.” All in all, the picture offers pleasures to both eye and mind, presenting an attractive and appropriate image with which to decorate any wall.

It is noteworthy, then, that such paintings were commonly hung on both sides of religious icons, to frame the central image and perhaps to supplement the actual flowers that would have been offered along with food and drink on the altar table in front of the paintings. Carried back to Japan during the 13th and 14th centuries by monks and students returning home after periods of study in China, such paintings are found even today in various temples in Kyoto and Kamakura. The present painting most likely also had a right-side mate; the lack of pictorial space, the flattened forms, and the strongly formalized surface pattern suggest a date in the late 14th century and associate it with works of the Piling school of artists.