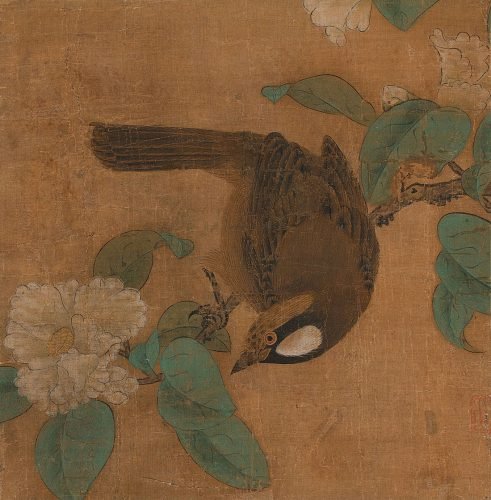 ‘Bulbul on Branch of Camellia’

A bulbul clings to a flowering branch of camellia, the major forms emphasizing the diagonal axes of the picture, with the branch rising from lower left to upper right balancing the opposite orientation of the bird, the body of which creates a falling axis from upper left to lower right. The point of such manipulation was clearly to achieve a composition that is dynamic— hence the diagonals—while yet remaining well balanced, and the bird is thus placed very near the pictorial center of the work.

This type of composition is well known from Southern Sung renditions of the theme, in works such as what might be a pair of paintings attributed to the court master Ma Lin (1st half 13th century) (figs. 1-2). The diagonal orientation of these compositions, the tension engendered by emphasizing one side of the picture over the other, and the firm lines that demarcate the limbs on which the birds perch are somewhat similar in all, but there are also differences from the present example. The bird here is placed in a far more static position than in the other paintings and consequently there is much less pictorial tension. Rather than connecting two adjoining sides of the painting, leaving the empty space diagonally opposite to contrast with the painted areas, the branch in the present painting connects horizontally opposite sides of the picture in a more balanced but also less tension-filled composition. Differences are visible as well in the drawing of the branches, with those attributed to Ma Lin being strong, crisp, and forceful while in the present painting the lines are more descriptive than expressionistic.

The lineage of ‘Bulbul on Branch of Camellia’ thus connects with the Southern Sung Academy tradition in terms of subject but differs from those precedents in execution, with both composition and brushwork changed to accord with a new paradigm. The work is thus more likely to date to the Yuan era, late 13th to 14th century, when the Academy and its standards had ceased to exist. 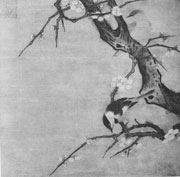 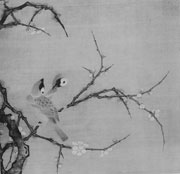