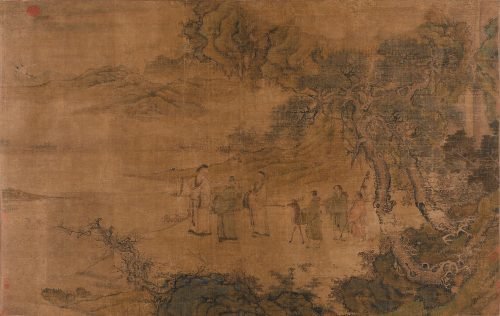 On a foreground riverbank, shaded by tree and overhanging mountain, appear three male figures wearing scholar’s robes and attended by three younger men standing by deer with one carrying a staff. A red sun appears in the upper left of the painting as does a crane flying downward. Across the river, partially obscured by mist, rise rounded hills in the distance. The rocks and trees are given definition by stipplings of dots and textured by interweaving brush strokes. Especially the foreground rocks but also the overhang above were colored with blue-green pigment, which originally would have created a fairy-tale atmosphere for the work. Although the painting is no longer in pristine condition, its drawing and the assured placement of forms identify the artist as a master of his craft.

The three main figures can be identified as the Three Star Gods: Fu-hsing (God of Blessings), Lu-hsing (God of Rank and Emolument), and Shou-lao (God of Longevity).[1] The deer is a potent symbol of longevity since it is the only creature capable of searching out the fungus of immortality. The crane also stands for longevity while the sun is an embodiment of spring and of the emperor, here joined with the lucky color red as on the Chinese flag. This plethora of auspicious symbols makes the painting ideal for gracing the home of some fortunate official or merchant.

The basis for much of the style here can be found in paintings by the Yuan dynasty master Sheng Mou (active ca. 1310-1360) (fig. 1). In the example illustrated here of his work, Sheng also used the same combination of blue-green coloring to great visual effect. The present work would seem to have been based fairly closely on the work of Sheng Mou but to be some generations later.

The unusual size and proportions of the present painting argue forcefully that originally it was mounted as a screen or incorporated into a distinctive piece of furniture. The practice of decorating furniture or screens with the addition of paintings began at least by the 9th century and the end of the T’ang dynasty. During the Sung era the practice spread and became much more common, so by the 11th-12th century the dwelling of a person of wealth and status would have been graced by free-standing screens as well as by furniture decorated with paintings (fig. 2). A painting of the Yuan dynasty (fig. 3), a portrait of the famous literati artist Ni Tsan (1301-1374), suggests how the present work could have been used, as backdrop for a raised k’ang platform in the reception hall. The popularity of this usage is confirmed and its potential elaboration is suggested by another Yuan painting, the “Whiling Away the Summer” by Liu Kuan-tao (active ca. 1270-1300) (fig. 4). Here the screen motif is redoubled, with the screen backing the k’ang portraying a second platform also backed by a pictorial screen, creating an interesting competition between different realities.

A surprising number of horizontal paintings of similar size attributed to the Sung period would seem to have produced during the Ming dynasty. “Enjoying Antiquities,” a signed work of the later period by Tu Chin (late 15th century) (fig. 5), is of comparable size to the present work (126.1 x 187 cm), and a comparison of style suggests that our painting should be dated somewhat earlier. 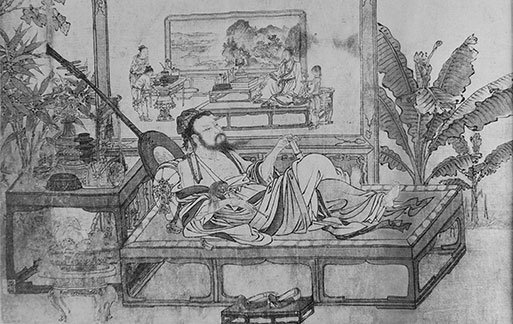 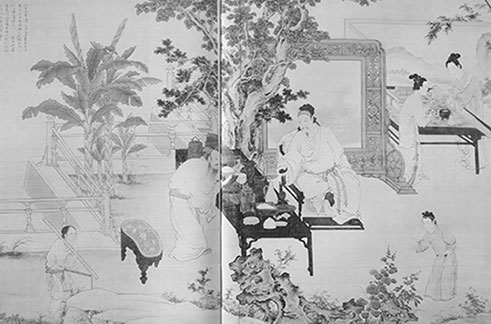