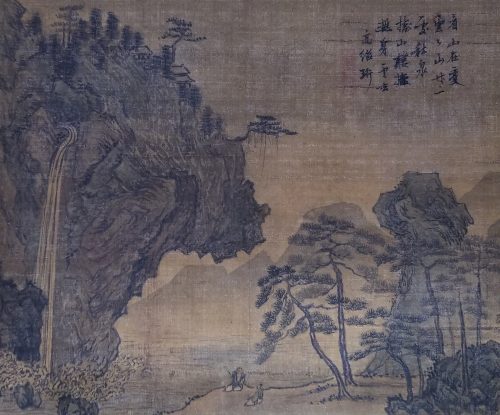 Album of 5 leaves, ink and color on silk

This album is graced with a distinctive type of tree: rather thick trunks, bristling branches, and a dearth of foliage. Precedents can be found in works of the late Ming period, by artists such as Zhang Hong (1577-1652 or later) and Sheng Maoye, but the expressionistic treatment of trees, rocks, and mountains is most characteristic of a later period, especially in Korea (figs. 1-2). Note especially the abstract treatment of the rock surfaces and their arrangement in space as layers that protrude further as one moves up the form.

The inscriptions do not yield the name of the artist—leaf 4 was painted after the Yuan master Wang Mien—but his period of activity can be estimated by the Chinese poems he quotes, one by Gao Jiheng (1797-1865) and two by Yang Shangwen, active during the Daoguang era (1821-1850). It can therefore be suggested that the album was painted by a Korean artist, perhaps active in Japan, during the second half of the 19th century. The final inscription on leaf three suggests that a Chinese wrote the inscriptions, opening the possibility that the were added to an earlier album, possibly 18th century in date. The album was acquired in Japan bearing an outer label identifying it only as “Korean.” 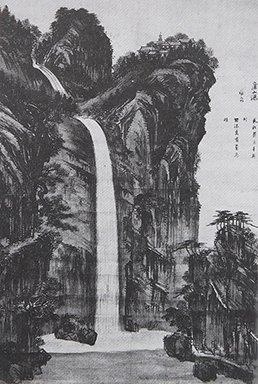 Leaf 2:
“Mountains are seen in the auspicious clouds,
clouds and mountains appear in the same place;
Autumn waterfall hangs over a mountain pavilion,
the figure of a woodcutter is becoming dim.
Gao Jiheng (1797-1865) 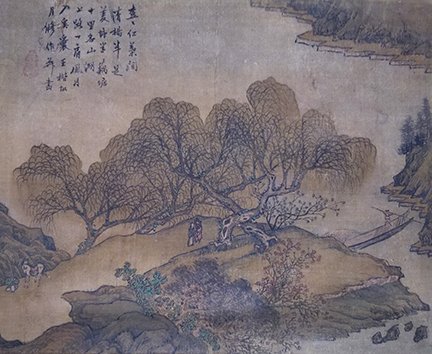 Leaf 3:
“Tree after tree with red leaves, among them pure willows,
Half the riverbank is maize, half is lotus;
For ten li there are famous mountains on the lake-side road.
How can the wind and moon, enter my poetry satchel?
Yang Shangwen (19th century)”
Wang Kai, called “Old Moon,” revised and wrote this.” 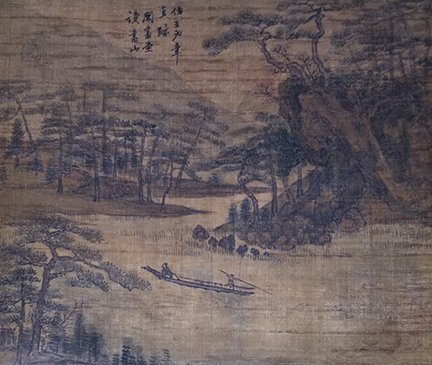 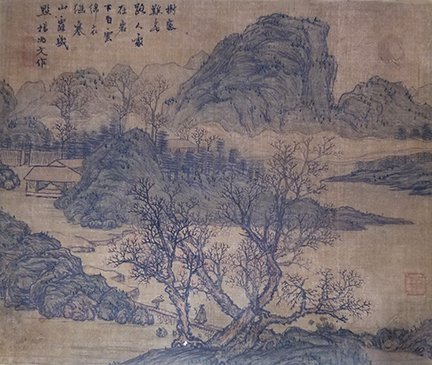 Leaf 5:
“Trees grow so dense it is difficult without a road,
houses are situated beneath the cliff;
White clouds continue like cotton robes,
How many dew drops are in the cold mountains?
Yang Shangwen (19th century).”