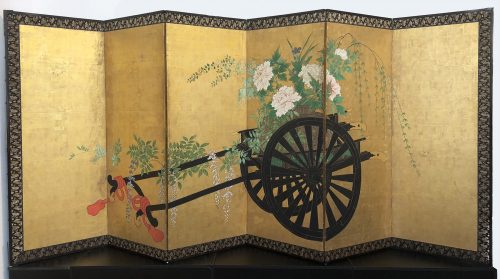 A single black-lacquered cart dominates the composition, its rich color setting off by contrast the red of the cord and tassels used to attach the cart to a horse, and the gorgeous peony blossoms appearing above. Placed in a large wicker container, the flowers include hibiscus, wisteria, iris, Japanese roses, and an elegant spray of weeping willow, all clothed in the fresh and attractive colors of spring and summer. Probably the right half of an original pair of screens, this would have been matched in its mate by a cart displaying flowers associated with autumn and winter.

Two types of flower carts are known in Japanese society: one a cart that is loaded with flowers, as here, the other a cart used by people when going out to view flowers. Flower carts such as the present example still appear in Kyoto, for example, in the Jidai-matsuri festival staged in October of each year. The popularity of paintings of these flower carts dates back at least to the early Edo era when Kano Tan’yu (1602-74) painted a “Flower Cart” on the wooden doors of a hall in Nagoya Castle. From that time onward, it is said, flower-cart paintings were often executed on wooden doors in palaces and mansions.

Such paintings were strongly influenced by the art of flower arranging, which reached a peak during this same period under the second Ikenobo Senko, who perfected the rikka or “fixed flower” style. The flower carts thus could be depicted in either a honyuka style, which literally means to toss flowers into some container, or arranged in this fixed style. On the other side of the Nagoya Castle doors mentioned above another type of arrangement is painted, with the flowers arranged in a container. Both styles were related to contemporaneous flower-arranging styles popular then among the upper class and the wealthy of the day.

The rikka style was associated with ritual decoration of rooms, but from the early 17th century onward it was appreciated as a discipline or hobby, as were painting and calligraphy. The emperor Go Mizuno (1596-1680) is said to have loved rikka to distraction and did many arrangements himself. The practice then spread from palace to various temples and eventually to the homes of the wealthy. The Kakumei-ki, the diary of the abbot of Kinkaku-ji, describing events between 1635 and 1668, often mentioned rikka kogyo or flower-arranging events in which participated aristocrats, monks, and wealthy merchants. The “Flower Cart” attributed to Kano Tan’yu was completed in 1633, one year before the visit of Shogun Iemitsu (1604-1651) to the palace that had been built especially for him. The flowers here were painted directly on the wood, with gold used in a maki-e technique for the golden chrysanthemums on the wheels and sprinkled on the background to suggest mist. The flowers are arranged in rikka style, although they appear to be naturally arranged so as to convey an impression of freshness and spontaneity.

The present rendition of this theme is more restrained than that by Tan’yu, and was painted a century or so later, but it belongs to a stylistic and technical lineage that it sustains in quite splendid style. The image here would have been associated in the minds of viewers with earlier examples, such as that done by Tan’yu for the Shogun, and the screen would thus have served to associate its owner with the elite of society at however distant a remove.