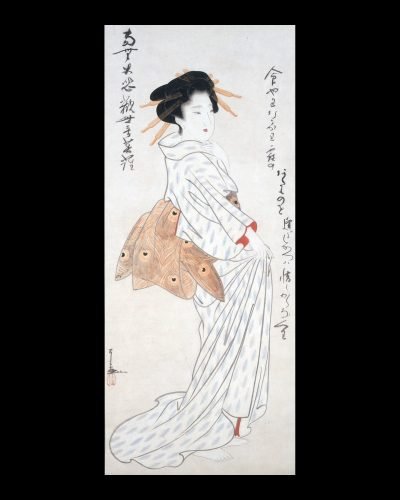 Inscription by Sengai (1750-1837)
“Life is fragile like a drop of dew, but I wouldn’t regret losing it if instead I could see you.
Believing in the Great Mercy Kannon Bosatsu. Sengai.”

Box inscription by Awakawa Koichi (d. 1977), a specialist in Zen painting:
“Painting of a courtesan inscribed by Sengai.”

The beautiful courtesan stands in three-quarter rear view, her head turned in a backward glance. She wears a traditional white robe with blue design, held in place by a sash with a peacock motive. In East Asia the peacock symbolizes dignity and beauty, dancing when it sees a lovely woman. It was also known to drive away evil, perhaps especially fitting for the woman who looks behind her as if to view her own past.

The poem here written by Sengai was composed by Kino Tomonori (d. after 905), one of the Thirty-six Immortal Poets, and was included in the Kokinshu (ca. 914) in vol. 12 as number 615 under “Love Songs.”

Sengai (1750-1837), the monk Gibon, was born in Mino province. Although perhaps known today primary as a Zenga painter, Sengai had a long and distinguished career within the Buddhist church. Entering Seitai-ji in Mino at the age of eleven, Sengai at age nineteen received permission to study with a Zen master at the Toki-an; invited to Shofuku-ji in Hakata, he eventually became the 123rd abbot (1790-1811). During the last twenty-six years of his life, Sengai lived as a layman in Hakata, earning a reputation for a most idiosyncratic style of painting and writing.