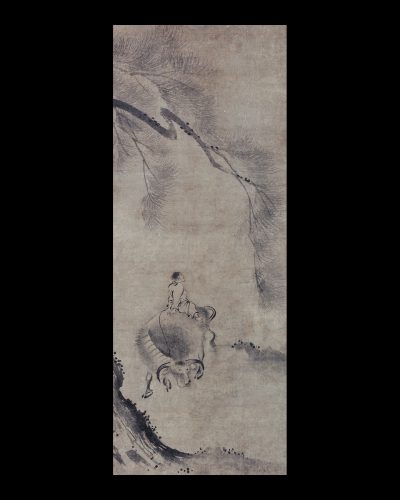 Within a shallow stage created by a foreground tree and middle ground rocks appears a herdboy on the back of an ox, the scene framed above by a pine branch that swoops downward above the two figures. A progression into depth is suggested quite effectively by the placement of forms, especially by the ox presented in three-quarter view. The composition is organized along pictorial diagonals and articulated mainly in terms of ink tonality. An impressive variety of brushwork ranging from rather wet washes to dryer and livelier lineament distinguishes the work.

The superior control of brush and ink and sophistication of the composition identify the artist as a master in the art of painting, hence the traditional attribution to the great Chinese monk-artist of the late Song dynasty, Fachang Muqi. Another painting of a similar subject also attributed to Muqi was inscribed by Gaofeng Yuanmiao (1238-1295), which helps to date that work at least to the later 13th century even if not by the master himself. The present painting in comparison is less formalized and more realistic, which might serve to indicate that it is slightly earlier. However, painting styles did not evolve in a single consistent direction during the 13th century and the relative realism here could simply be the choice of a more conservative master of the 14th century, hence the 13th-14th century dating given here.

Another intriguing question is the artist’s nationality since Japanese painters were active in China during this period and many at home were profoundly influenced by Chinese styles. It is argued here that the present work, despite its degree of realism, is nevertheless more abstract and formalized than one would expect of a Chinese artist and therefore an attribution to a Japanese painter seems reasonable.

The subject of the painting might seem on first impression to be no more than a most pleasant reminder of the joys of a bucolic life—just the thing to please the eye and soothe the mind of some over-worked urban bureaucrat—but in fact it also calls to mind the well-known Chan (or Zen) theme of an ox and its herdboy, used in a ten-fold parable to illustrate different degrees of understanding fundamental religious doctrine leading to enlightenment.