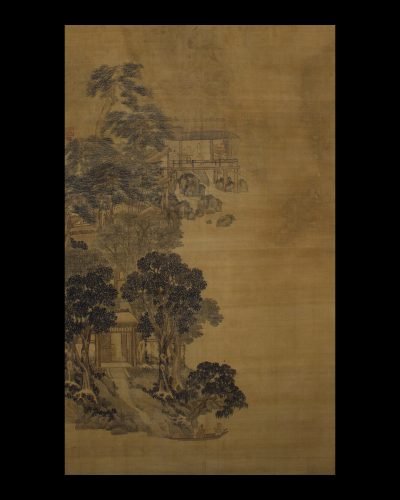 “Scholars in a Landscape” 高士山水図

In the foreground of this dynamic composition, based on the pictorial diagonal axes of the picture, a scholar attended by three servants arrives at the gate of a riverside villa. A large jug of wine accompanies him and trays of what one assumes are the proper accompaniments to a bout of drinking and conviviality. Immediately above another servant stands at the half-opened gate, inviting the guest to ascend the path beyond. Another servant appears in the house above while three more attend the scholar seated in the viewing pavilion that extends out over the open expanse of the river or lake. A ding-shaped incense burner and wine cups stand on the lacquered stand to the right, their particular delights awaiting the arrival of the friend disembarking below. The whole is a perfect visual evocation of the ideal of scholarly friendship, the sharing of wine and elevated conversation in a setting far removed from the hustle and bustle of the dusty commercial world.

Although the work is not signed, the style bears witness to its creation during the earlier 17th, the late Ming era, when such images were common in the works of such Suzhou professional artists as Sheng Maoye (fig. 1)—note the heavy dottings and spikey trees combined with interior texture strokes on earthen forms. Incorporating some of the pictorial devices of 16th century masters of the Zhe school, these painters followed the15th-16th brushwork of Suzhou painters of the Wu school to bring those traditions to a striking climax during the early 17th century.