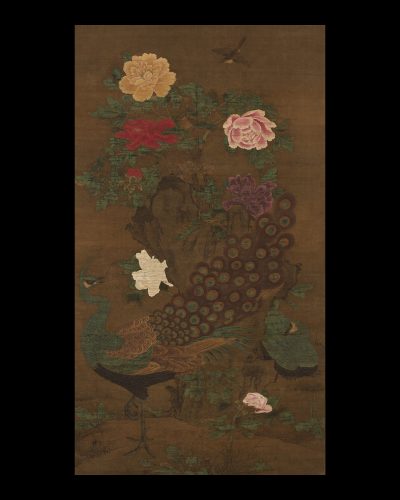 The composition is dominated by a peacock that stands proudly with one leg raised and tail feathers extended in colorful display. A peahen stands to the right, head turned to look at her glorious mate. Luscious peonies appearing above and below the birds emphasize them as the main focal point of the painting. A small sparrow flying downward at the top adds a dynamic note to the well-balanced composition, the whole conveying the tranquil aura of a late spring-early summer day.

Although the painting is neither signed nor sealed, it can be dated to the middle Ming era, the later 15th or 16th century, on the basis of style. The emphasis here on the horizontal and vertical axes of the composition harks back to a Yuan dynasty revival of Northern Song styles, and the creation of this attractive image may thus have occurred fairly early within this period.

The main elements in the painting are attractive in and of themselves but they also convey auspicious connotations that were well-known in Asia. Peacocks, for example symbolize dignity and beauty and they also drive away evil, while peonies, the King of Flowers, are an emblem of wealth and distinction. Aesthetic beauty and symbolic content are thus here combined to yield a most compelling image.

Such large and decorative paintings were popular not only in Ming China but in Japan as well, where the present painting was acquired. In both countries they were considered highly desirable for display in ornate entry halls and reception rooms, their strong visual impact being held most appropriate for those public areas.