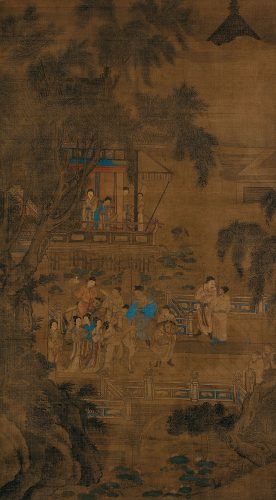 “Preparing for a Hunt at an Imperial Pavilion”
皇帝猎国

A blue-robed figure on horseback, likely the emperor, pauses on the verandah of a riverside pavilion. The same color picks out two females, one on the verandah, the other in the pavilion above, perhaps his favorites at the moment. The emperor is about to depart on a hunt and bends down to accept a stirrup cup from one of the court ladies; he is at the front of a file of horsemen, the last of whom supports a hawk on his right fist. The foreground scene is crowded with male attendants, courtiers, guards and court ladies of various statuses while other ladies and attendants appear in the pavilion. Rocks, trees, and a lotus pond in front, willow trees above, and the roof of a palace structure rising above the clouds in the distance frame the privileged participants of the event.

The picture is somewhat reminiscent of 12th-13th century Southern Song Academy works (figs. 1-2) but is closer in approach to paintings by the Ming master Qiu Ying (d. 1552) (figs. 3-4). Part of the value of works such as the present was their ability to recall the glories of past ages, such as the Song, and in that the present painter succeeded admirably, producing a fine narrative work that in addition carries connotations of the elegant activities associated with the imperial court, where the heart of privilege resided. 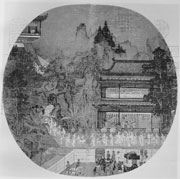