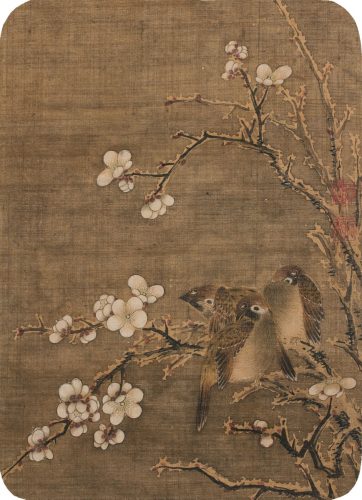 Three sparrows huddle together against the cold of winter on a branch of blossoming plum. The birds, of similar size and shape, are individualized by their postures, the head of the bird on the right partially hidden by a wing, the bird in the center turning its head back and to the right, while the bird in the back raises one leg to scratch its head. The plum blossoms are rendered in some detail with their placement along the rising diagonal axis of the painting separating the composition into two parts, contrasting the bird-populated area with empty, evocative space.

There is some possibility that this painting was originally a rectangular album leaf but oval-shaped fans are known quite early and become quite common during the Southern Song era. Sparrows appear in many paintings of the time and the present work may date to that era as well. However, the silk is coarser than is usual for paintings done for the court, so it can be suggested that it was done during the late Song period for a non-imperial market or even during the early Yuan period when the imperial silk manufacturies had ceased production.