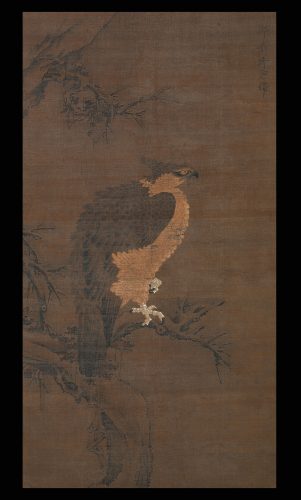 Inscription: “Li Di painted this in front of the Emperor.”

A powerful eagle peers balefully from his perch on the snow-covered branch of a tree, the bird individually characterized by the crest of feathers on its head and its white chest and lower body. While the inscription indicates the artist to be Li Di, who indeed had the rare honor and privilege of painting before the Song emperor as the inscription here indicates, the style of the painting suggests a later date, sometime during the 13th or early 14th century. By that time a significant stylistic change had occurred in which compositional arrangements and pictorial depth favored by the earlier Song painters of Li Di’s generation had changed. The central image here and compressed space indicate the later date, while still capturing the spirit of the great bird painter Li Di.