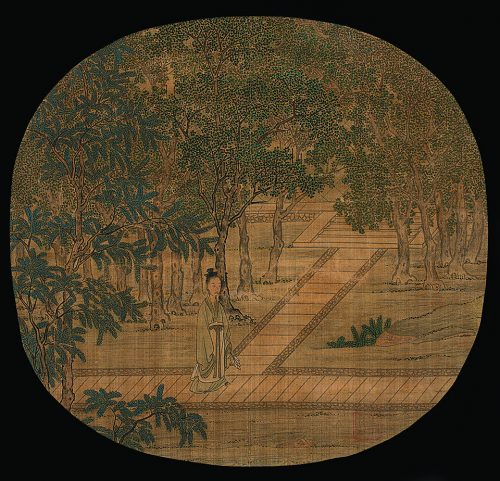 A scholarly gentleman enjoys a privileged moment, freed from official duties for the day, strolling through a spring garden, alone with his thoughts. Dressed in the sedate garb of a scholar-official, his posture calm, his visage meditative, he has paused at the juncture of paved paths oriented at right-angles, the one to his left leading to steps and a platform beyond. In contrast to this serene image, the surroundings provide a riot of textures in the foliage of the mimosa and other trees, a juxtaposition that emphasizes the figure’s reserved demeanor.

Such great emphasis on the textures of tree foliage can be found in other paintings of the 12th century, such as one leaf from the “Maoshi” of Ma Hezhi (d. ca. 1190) (fig. 1), another by the same artist from the “Odes of Zhou” (fig. 2), “Summer Mist along Lake,” (fig. 3) by Zhao Lingrang (active ca.1170-1100), and even the “Sakyamuni beneath Blossoming Trees” (fig. 4) attributed to Chen Yongzhi (active early 11th century). It can also be noted that the compositions of paintings of this period are more filled and less spacious than they would become by the 13th century and the end of the Southern Song era when pictorial space itself became an active element of compositions.