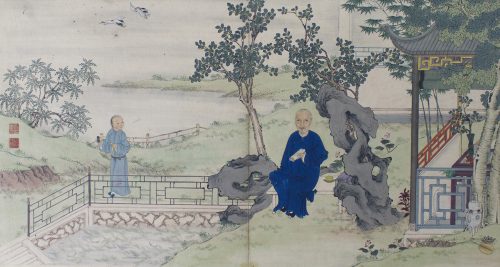 Artist’s seals:
Yao Hao (?) and one other

Although the identity of the artist is not known, the portrait can be identified as portraying a man named Bichuan, mentioned in all of the colophons attached to the painting.1 The earliest date appearing in the colophons is 1832, which probably indicates the date of the painting. Bichuan then requested inscriptions from many of his friends, up to 1836; there is not a consistent sequence among the dates because some writers chose to add their comments on leaves that already bore earlier inscriptions.

Bichuan wears a dark blue scholar’s robe and sits on a bench with scroll in hand and teacup beside him. The tree growing immediately above his head is a Sophora japonica or Scholar Tree. Appropriately enough, it grows even in inhospitable environments, those with air pollution, poor drainage, compacted soil and drought, suggesting that true scholars survive and continue on their chosen course even under the most adverse conditions. Garden rocks appear on either side of him and an elegant pavilion is on the right, housing a marble-topped table supporting a gu-shaped vessel displaying a leafy camellia branch. Wutong trees frame the pavilion, while a brazier for tea-water and banana-palm leaf fan stand ready for use at their base. A servant cleans an ink-stone toward the left margin of the picture while long-necked birds fly above.

The painting is intended to embody many of the delights of the scholarly life—food for the mind as well as the eyes, enjoyed within a controlled and protected environment that is perfect in every respect. Would that we were all so privileged!

1. A monk named Ruche (d. 1864) had the by-name of Bichuan and conceivably could be the sitter of this portrait. (See Zhongguo meishujia renming cidian, Shanghai, 1991, p. 190). However, Ruche died at an age “over 70,” meaning he would have been in his early 40s when the first colophon to the album was written, quite younger than the image in the present portrait.