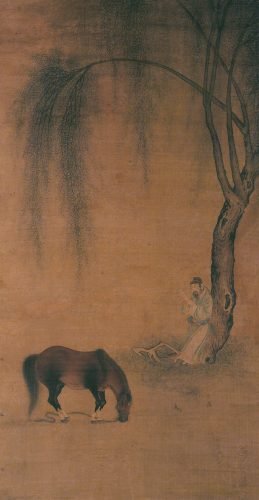 In the foreground a well-fed horse grazes, its reins trailing near its feet. To the right a scholar reclines against the trunk of an elegant willow tree while engrossed in reading a book. The drawing is excellent, the composition assured, marking the artist as a professional in full command of his art.

The horse played an essential part in the expansion of the Chinese empire from the Han dynasty onward, and it thus became a symbol of political and social power: “the strength of dragons and horses” is one of the New Year wishes pasted around the house.[1] That this power should and must be harnessed and used on behalf of mankind is made manifest in many paintings, the “Shining Light of Night” attributed to the 8th century master Han Kan, for example (fig. 1). Here the spirit of the animal is made manifest by the uplifted feet and the appearance of straining against his restraint.

During the Yuan dynasty, horses were featured in several paintings that were in fact political metaphors, for example, the “Fat and Lean Horses” by Jen Jen-fa (1255-1328) (fig. 2). In this case the thin horse represented the literati scholars who, loyal to the overthrown Sung dynasty, refused to serve the Mongol conquerors and thus were forced to live in poverty and obscurity but also in safety; those who did chose to serve, on the other hand, were well-fed but, as is suggested by the trailing rein, lived in dangerous circumstances.

The present painting would seem to refer to the work by Jen Jen-fa, but here it is the fat horse—the serving officials—who is at risk while the supervisor, the official pursuing his studies while ignoring his real responsibilities, represents those who were failing to meet their obligations. One possibility for a political situation which falls within the period of execution suggested by the style of the painting is during the era when the eunuch Wei Chung-hsien (d. 1627) usurped imperial authority and virtually ruled the empire with the support of many officials and unworthy censors. 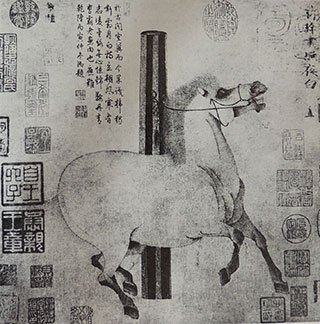 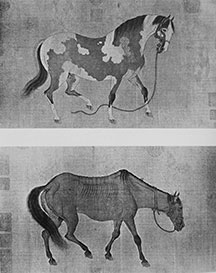