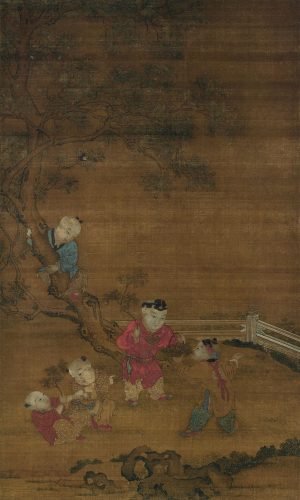 Situated in a space defined by foreground rocks and a marble railing in the middle ground, five boys pick and gather crab-apples. A boy in the tree hands down branches with fruit which is then gathered in a basket held by two others, while to the left another two boys hold up a branch. Organized around the diagonal axes of the picture, the work is also balanced by the vertical axis (defined by the largest boy in red robe) and by the horizontal axis (implied by the railing). The result is an image that is stable yet of visual interest, with stability balanced by visual excitement derived from the asymmetrical composition.
In China the crab apple was unknown in the wild and became one of the treasures of the palace grounds in Beijing. Called hai-t’ang in Chinese, the second character is pronounced the same as one meaning “hall” or “home,” so the visual implication here is one stressing the good fortune of having a home with children. A crab apple tree provides shade for the garden and contributes its fruit to the pleasure of the boys, who of course are incomparable emblems of good fortune and future prosperity.

The iconography and combination of children playing in a garden originated at court during the Southern Sung era (1127-1269) in the works of such 12th-century court masters as Su Han-ch’en (fig. 1). Ming dynasty (1368-1644) imitations of these typically, as here, close in the composition by means of stone borders or walls (fig. 2). A number of these latter can be associated with the Ch’eng-hua reign-era (1465-1487) and the present painting can be dated to that general period of time, the late 15th or early 16th century.