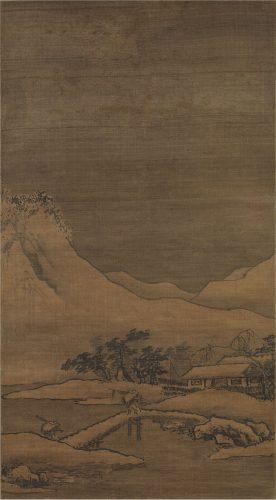 A fisherman carrying his net is followed by a servant with the oars and crosses a bridge through snow, his destination a house built under overhanging, wind-blown trees. The net drying to the left of the house identifies it as the man’s home. Serried hills extend to the distant horizon, rising on the left to a peak dotted with shrubbery and trees. The mood is quiet, with the absence of additional narrative suggesting the frozen atmosphere in which the scene takes place.

Such attractive scenes were common during the Sung-Yuan era (10th-14th century), much appreciated by city dwellers especially during the sweltering months of summer, but the dottings on top of the peak here identify the work further as having been done by an artist following the style of Fan K’uan (ca. 960-ca. 1030). Characterized especially by the stubble of trees covering distant peaks (fig. 1),Fan’s style of painting inspired the efforts of later generations of artists who used the motif to establish a connection to Fan while yet advancing the style through individual transformations of it (fig. 2).1

The present “Winter Landscape” falls clearly within the lineage of Fan Kuan, less complex than either of the two examples illustrated here, and thus perhaps a bit later in date, but yet a charming example of a style and subject that held sway for a considerable period of time and for reasons that are still apparent today.

1. Although attributed to the artist Hsu Tao-ning (ca. 1000-after 1066), the painting illustrated in figure two is dated by inscription to a year that did not exist and is signed in his name with a title that is impossible for the period; the painting most plausibly dates to the 13th century. 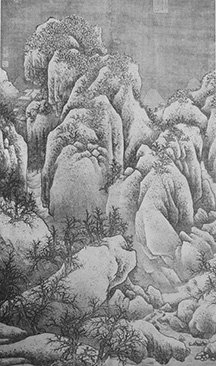 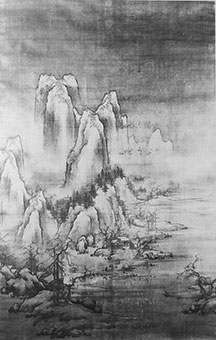