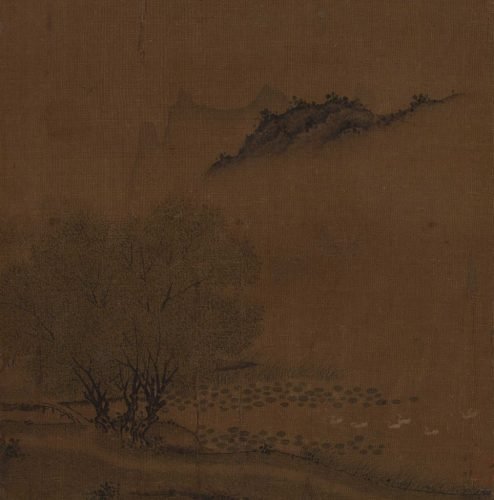 Six ducks swim among lily leaves near the marshy bank of a willow-lined stream. A footpath meanders through the grass, leading along the bank to a bridge giving access to the further bank of the stream. This water-course flows into a much larger area, perhaps a lake or great river, beyond which appear several ranges of mountains, their peaks protruding above the intervening expanse of mist.

Although small in size, the painting exhibits a pleasing diversity of techniques, with delicate strokes and dots used for grass and leaves, elegantly-graded wash applied to create the distant mountains, and stronger strokes and darker ink emphasizing the strength of tree trunks and middle ground peaks. A restricted palette was used, mainly green for lily pods, grasses, and leaves, while the ducks were originally picked out with silver pigment, which darkened somewhat over time.

The mood of the painting is quiet; nothing of great moment is portrayed, and nothing is present that might stimulate strong emotions or require great leaps of the imagination. One responds to this kind of painting more slowly, savoring its quiet charm as one would a poem, examining and enjoying each part for its specific aesthetic qualities and then the subtle relationships established between them.

The originator of this attractive style is generally held to be Chao Ling-jang, a member of the Sung imperial family active during the closing decades of the 11th century. As might be expected, considering the subtleties of the style, Chao came to painting indirectly, through literature, first reading about artists in the poems of such Tang masters as Tu Fu and then seeking out and collecting their paintings. ‘…Ta-nien (Chao Ling-jang) used colors in rendering mountains, water, bamboo, trees, wild ducks, geese, and the like in the well-modulated manner of the famous masters of the Tang dynasty …,’ [Li Chih, Te-yu-chai Hua-p’in, Mei-shu Ts’ung-shu edition, vol. 18, IV/5.] Although basing certain aspects of his style on that of earlier masters, Chao also insisted on originality in his themes: ‘…Each time he did a painting he required that it manifest some new concept. People sometimes teased him by saying, ‘This must be the result of a trip to (the imperial tombs) at Chao-ling,’ which made fun of his (legal) inability to travel far afield, meaning that he never went beyond the five hundred Ii between the capital (of K’ai-feng) and Lo-yang …,’ [Teng Ch’un, Hua-chi (1167), Hua-shih Ts’ung-shu edition, vol. 1, pp. 275-276.] However, Chao’s aesthetic sensibility had been honed on poetry and on the works of great masters of the past, and thus even the mundane sites near the palace gates could be transmuted into the gold of his exquisite visions.

The paintings associated today with the achievements of Chao Ling-jang are all small in scale, either fans or album-leaf size works of art. Some of these are attributed to Chao himself while a number are given to other artists but most should be thought of as anonymous paintings and dated, like the present example, to the 12th or 13th century when Chao’s evocative approach was taken up by artists active both in and outside of court circles.