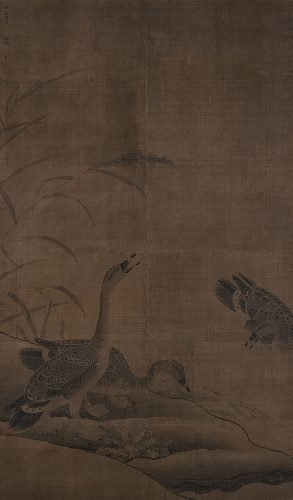 Inscription:
“Picturing and painting in the presence of the Emperor, painted by ______.”

Three ducks, two on the riverbank , the other splashing in the water, appear beneath overhanging reeds. The composition is organized mainly around the vertical and horizontal axes of the picture, countered by diagonal movements, lending a sense of stability as well as tension to the image, the pictorial constituents of which are placed quite close to the picture plane and thus invite close inspection. To do so is to be rewarded by observing the precise brushwork of the birds, set off against the looser strokes of the ground and reeds, all in all a perfect balance between the work as picture and as painting.

Although the work is clearly signed by the artist, very unfortunately the characters of his name cannot be deciphered. The formulation used here to communicate the honor of being allowed to paint in the imperial presence is the same as was used by Liang K’ai (figs. 1-2) in his inscription on a rock to the left of Sakyamuni. According to Chou Mi (1232-ca. 1308), other artists so honored included Ma Ho-chih, Su Han-ch’en, Li An-chung, Ch’en Shan, Lin Ch’un, Wu Ping, Hsia Kuei, Li Ti, Ma Yuan, Ma Lin, and Hsiao Chao. Chou seems to have listed these painters in no particular order, with all of them active during the second half of the 12th century and some into the 13th century.

Since the artist cannot be identified precisely, the dating here to the 12th-13th century must be supported by stylistic comparisons. Consideration of the evolution of the drawing of ground planes from the 11th to the very early 14th century (figs. 3-4) suggest that over time interest in verisimilitude gave way to an emphasis on calligraphic values, with formalism triumphing over naturalism, which certainly was a prime consideration of the present artist. A dating to the 12th-13th century thus seems justified both on the basis of the artist’s inscription and on the style of his painting.