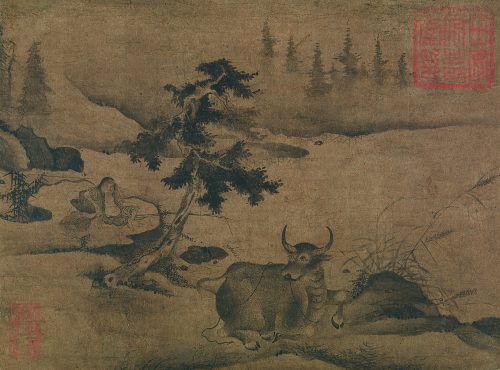 Collector’s seal:
Tayasu-fu Geido-in (“Seal of the Art Hall of the Tayasu fief”), collection seal of the
Tayasu branch of the Tokugawa clan, one of three in the main line.

Below a mist-shrouded range of pines, on a mid-ground protrusion into the river, a figure reclines on a rock, his fishing pole in front of him and a plaited palm-leaf fan to one side. Ak cedar tree separates this figure from the foreground scene, which features a reclining bull by riverbank rushes, his head turned inquisitively and one leg raised as if in anticipation of decisive action.

Organized around the pictorial diagonals, which is common in paintings of the Southern Song era, the picture features a number of characteristics that can be paralleled in paintings by artists ranging from Zhao Lingrang (active ca. 1070-1100) and Li Gonglin (ca. 1049-1106) to Muqi (ca. 1220- ca.1280). These associations help to date the present painting to the 12th-13th century, as does the relatively spacious composition, with clear and convincing recession in depth from fore to far ground, as is common in paintings of that era.

Paintings of buffalo were common during the Southern Song era when the capital was located in the south, home to a myriad buffalo and to artists who saw them on a daily basis. Usually, however, the creature is accompanied by a herd boy, comprising a metaphor for a stage toward Enlightenment, but here the animal looks at an adult male who seems to care little about discipline and much more about a life of striving for nothing in particular, believing in all serenity that it signifies nothing if a fish appears for dinner or not. The exposed stomach of this figure identifies him as one of the eight Daoist immortals, Zhongli Chuan, who was especially honored during the Song for his opposition to the invading Liao people who came to rule northern China. The artist this intriguing work thus drew on important elements of later Song cosmology, uniting Buddhism and Daoism as was in fact happening in society itself, presenting that idea in pictorial form that is most compelling and strikingly original.

The painting was likely brought to Japan very early on; its traditional attribution to Fan Kuan (ca. 960-1030) is surely based on literary sources rather than on actual images, which in itself argues for an introduction to Japan before the advent of block-printed illustrated books during the Ming dynasty. In Japan the painting was received at the topmost levels of aristocratic society. The Tayasu family was established by Tokugawa Munetake (1715-71), the second son of the eighth Shogun Yoshimune (1684-1751), who had been born into this collateral branch before being adopted into the main branch of the family. Baron Kawasaki was born in Kagoshima and at age seventeen moved to Nagasaki and entered the shipbuilding industry. Ordered by the Tokugawa Shogunate to move to Osaka, and then to Kobe, he established the Kobe Kawasaki Shipbuilding Company, the Kobe Newspaper, and the Kobe Bank, all of which were extremely successful.