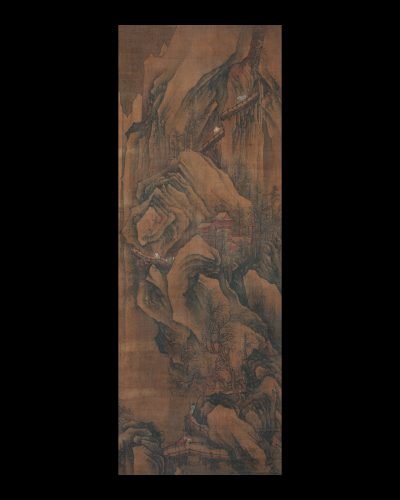 Inscription (a later addition):
“Painted by Sheng Mou of Wutang in emulation of the brushwork of Xia Youyu (Xia Gui).’

Convoluted mountain forms jut forward and thrust to left and right so as to fill up the entire pictorial surface, creating a baroque fantasy of the perils of travel through some dangerous mountain range, along a winding road that has been laboriously carved out of the rock. The uninviting, treacherous, unstable scarps reflect the perils of the Xuanzong emperor’s (r.713 -756) retreat from the capital in flight to Sichuan province, known at the time as Shu, the likely subject of this painting.

Travellers through impossible mountainscapes invariably bring to mind the tale of the Tang emperor, known popularly by his posthumous name Ming Huang (685-762), who fled with many of his court in attendance from Chang’an just prior to its fall to the rebel An Lushan in 756. The rebellion that lasted for another eight years was a watershed in the life of the dynasty, its political, economic, and cultural fortunes suffering a blow from which it was never able to fully recover.

The apocryphal inscription claiming the Yuan dynasty artist Sheng Mou as the painter, emulating the brushwork of the illustrious Southern Song master Xia Gui, is not without some relevance. The work of these artists can be seen, even if distantly, in this painting—Sheng Mou in the distinctive trees and Xia Gui in the broad axe-cut brushstrokes present in some of the rock configurations. The artist of this work, however, displays a talent for contorting forms, pushing and pulling them across the picture plane and thrusting them aggressively forward towards the viewer, constructing a landscape that is, in James Cahill’s formulation, “fantastic and eccentric.”

The best-known rendition associated with “Ming Huang’s Journey to Shu” is the horizontal, brightly colored blue-and-green painting attributed to the Tang master Li Zhaodao in the National Palace Museum in Taipei. There is something so dreamy and seductive about that painting that whenever its date of production (it is believed to be by some as late as Ming in date), it does not convey the gravity of the mid-8th century journey to Shu. Even so, Li Zhaodao could not have been the author of any such painting as the event happened well after his death. The anonymous painting here, however, expresses through the landscape forms a world in terrible flux, treacherous, apocalyptic. The winding mountain path seems impossible to navigate but the travellers forge on, we trust, following in the footsteps of their fallen emperor.