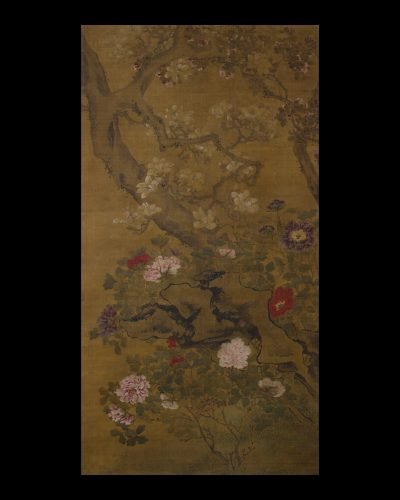 The striking composition is organized along the diagonal axes of the painting, featuring peony blossoms surrounding a garden rock in the lower portion with camellias leading the eye above to the lovely magnolia tree and blossoming cherry at the upper border of the picture. Designed to delight the visual sense, and to suggest the aromas associated with these blossoms, the work carries additional connotations supported by contemporary culture and literature that would make this a pleasing addition to any reception hall of however exalted a patron.

The style of the painting can be parallel most closely in works by the court painter Lu Ji (ca. 1440-ca. 1508) (fig. 1). Note especially the sharp ax-cut strokes that texture the surfaces of the rocks and the calligraphic line that delineates those forms. In both cases the compositions are decidedly asymmetrical, more akin to works of the Southern Song dynasty as opposed to those that followed Northern Song/Yuan dynasty prototypes (see catalogue 4.) At least fourteen artists are said to have been influenced by Lu Ji’s style of painting, and large numbers of paintings from this school were exported to Japan, the source of the present work, where they played some part in the evolution of the Kano school style. 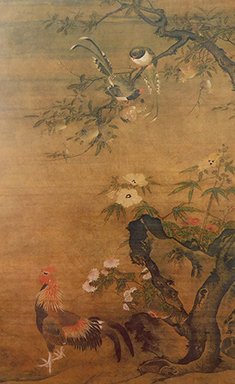