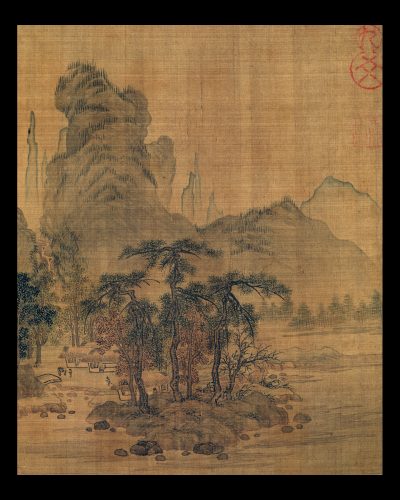 Tall trees shelter a riverside village, with mountain peaks rising in the distance. A touch of color on the leaves of several trees suggest the season is autumn. The village is peopled by five figures, two greeting one another while a third stands by, a fourth with staff appears to the right, and the fifth is by a house in the center of the picture. The drawing is casual, with attention on abstract elements rather than on detailed verisimilitude.

Bucolic scenes of farms and villages are known from the Tang and Song eras (fig. 1), but during the Yuan period that realistic approach was leavened by the influence of literati masters, who emphasized brushwork and a more idiosyncratic approach to painting. The result is suggested by a list of twelve taboos complied by Cao Zhao in 1388 during the early years of the Ming dynasty. “Avoid those (paintings); 1) with awkward composition; 2) with no distinction between near and far; 3) without arterial mountains; 4) with water courses that have no source; 5) with no variation in ground level; 6) with roads that neither begin nor end; 7) with trees that lack branches on all four sides; 9) with figures that are humped over and bent; 10) with architectural structures that are confused and disoriented; 12) which use atmospheric effects inappropriately; and 12) in which color is applied incorrectly.” These criteria sought to require of all paintings that they be well painted in a realistic manner—that the painted image stand in a direct relationship with the real world—and made no allowance at all for the more expressionistic mode of painting that had come into being during the course of the Yuan period.

The artist of the present work does made reference to past styles—the sharp peaks in the distance, for example, recall the art of Li Tang (12th century) but much of the rest is quite up-to-date and thus not up to the conservative standards of Cao Zhao. A similar approach can be found in works by Dai Jin (1388-1462) (fig. 2) and this relationship helps to suggest a date for the present work to the 14th-15th c. 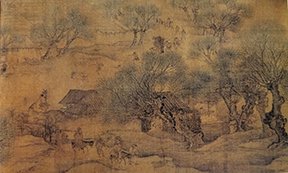