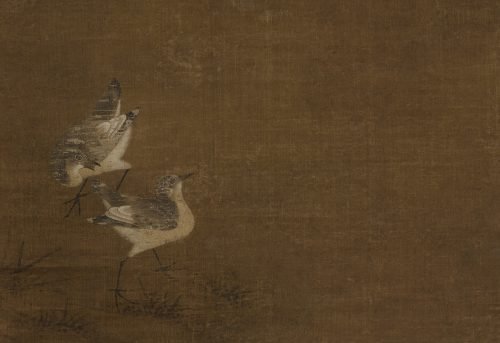 Two small birds perch on a grassy slope that extends in a continuous spatial recession into an amorphous background. The orientation of the plovers to one side of the picture creates a strong contrast and tension between the filled and empty portions of the composition similar to that found in paintings of the Southern Song era (1127-1279). The drawing is quick and sure, and identifies the painter as a master of his trade.

The English name for these birds, plovers, derives from the Latin pluvial, “rain,” because it was believed that they flocked together when rain was imminent. Among the three dozen or so species, the East Asian or Oriental plover breeds in Mongolia and passes through east China while migrating as far as northern Australia, a distant traveler indeed.

Such small-scale scenes featuring birds-in-a-landscape setting began at least by the 12th century, during the Southern Song era, and continued to be popular into the Yuan dynasty (1269-1368). One comparable work, painted by Chen Lin during the early 14th century (fig. 1), features additions by Zhao Mengfu that herald the new literati approach to painting, one that emphasized calligraphic brushwork. The present “Plovers in Grass” is more pictorial in nature and might thus be somewhat earlier, perhaps the later 13th century. 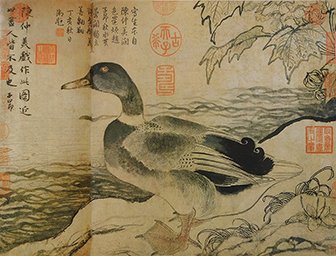