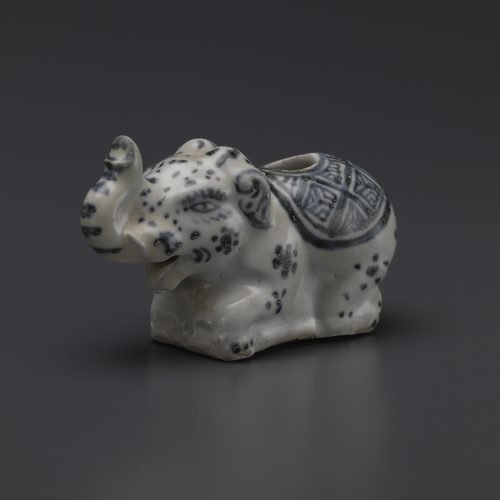 The waterdropper is in the shape of an elephant down on all fours, its curled trunk raised and its mouth open to form the spout of the dropper. The elephant is painted in underglaze cobalt producing blue-colored florets and dots on the body; his molded ears are outlined in cobalt blue, and the almond-shaped eyes framed by blue lashes. An oval aperture on the back for filling the small vessel is enclosed by a saddle blanket painted with dark cobalt geometric patterns, all above the molded tail that is swept to one side. The unglazed base is flat and the exposed stoneware body is greyish in color.

The elephant was a symbol of royalty and authority as well as knowledge and truth as the Buddhist scriptures were held to have been disseminated from India on the back of an elephant. In lands south of China the domesticated beast was used in ceremonies as a conveyance for royalty but also as an important workmate. Here the decorative patterns indicate the beast is from the royal stables and readied for its elevated task.

The technique for using cobalt to paint designs on the surfaces of the ceramics before glazing and firing and of using enamels to create colorful overglaze patterns were learned from the Chinese masters by potters in Annam, the present-day Vietnam. The feeling of seriousness and sophistication of the Vietnamese wares produced during the 15th century, when the Chinese models were being most closely followed, gave way to a more spontaneous and light-hearted feeling in the products of the following century when the present vessel was produced. The basic production techniques were often employed in quite individualistic ways resulting in a line of wares that is both distinctive and often disarmingly enchanting, as is the present waterdropper.