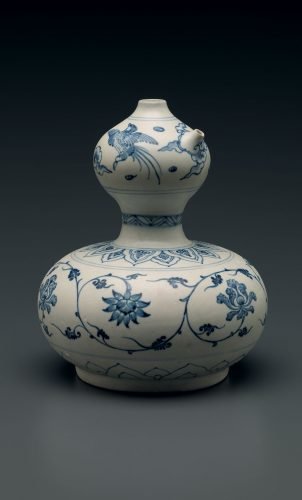 Provenance: Formerly in the collection of J.J. (Ken) Baars

The exquisitely potted ewer is of gourd form with a larger lower bulb, a narrow constricted midsection rising to an onion-shaped upper bulb with a small spout and terminating in a small mouth. On each side of the spout is a sparrow-like bird in flight drawn in deep cobalt; one painted with speckles, the other with a white breast. The birds careen among evenly spaced trailing clouds and dots with four further cloud forms trailing vapors radiating from the spout. A floral diaper band encircles the narrow waist above a finely executed overlapping lotus collar, each petal infilled with scrolls. The lower bulb is decorated with a precisely penciled floral meander of alternating peony and lotus above a simple petal band over the foot. All the registers of decoration are divided by double line borders. The cobalt is a good grey blue beneath the thin glaze, the glaze with a matt surface. The putty-colored stoneware body is visible on the unglazed base.

Among the more charming and unusual shapes produced during the 15th-early 16th century in what is modern-day Vietnam are small gourd-shaped spouted bottles like the present piece. While a small number have been published, such as one from the Asian Art Museum of San Francisco (fig. 1), the type is hardly plentiful. Their numbers in our world, however, happily increased with the discovery of a shipwreck off the coast of central Vietnam in the South China Sea and the 200,000 ceramics that comprised the cargo salvaged. The sunken ship was found in the vicinity of Cu Lao Cham Island and is hence called the Cu Lao Cham ship or alternately the Hoi An ship after the market town, important from the 15th century onward, located on the Vietnamese coast nearby. It is believed that the ship was of Thai origin but transporting exclusively Annamese wares to Indonesian and Southeast Asian markets, in lieu of Chinese wares that were no longer easily available after a ban on export had been declared by the Ming government. After the late 1990s excavation of this massive quantity of ceramic material, certain selective and representative examples were given to various museums in Vietnam and the remainder auctioned through Butterfields.[1]

Two gourd-shaped bottles, one with spout and the more common type without spout, which were auctioned at Butterfields, are illustrated here (figs. 2-3). The catalogue notes, “intact double gourd spouted bottles are very rare, and few were found in this cargo.”[2] The five illustrated in the Hoi An catalogue are similar to the present in that all have the waistband decor. The ensemble of motifs that appear on these spouted bottles and the closely related gourd-shaped bottles without spouts was standard and repetitive, now and again with a more unusual addition, such as the vessel with the leaping horse (fig. 3). The color of blue in these ceramics might be quite intense but is more usually softer in hue, and while the style of painting might be what we would call “painterly,” designs that appear more like pencil-drawings are not uncommon, for example, as present on a ewer hailing from the same private collection as the present and one noted in the Hoi An auction catalogue (fig. 4).[3]

If Chinese technology prompted the origin and development of underglaze-cobalt decorated ceramics in Vietnam, the mid-15th century Chinese ban on exports opened the possibility of widespread markets for the Annamese wares and a great boost to their production. With Chinese porcelain export in abeyance, the Annamese could step in and fill the void. Some small measure of the extent of this endeavor is suggested by the Hoi An cargo alone.

The Annamese underglaze blue-decorated ceramics from this period project qualities of softness, warmth, casualness, ease, simplicity and reserve which are the source of their great charm. In part the materials themselves—these are stonewares rather than porcelain—and especially the muted character of the glazes—the pieces were fired at a lower temperature than their Chinese porcelain counterparts—result in “blue and white” quite different from the Ming-Qing porcelains of China. In the case of the later, one is invited to observe only, hands off! In the case of the present Annamese wares, similar to the stonewares of China’s Song dynasty, one desires to actually touch and hold them.

1. For a bottle from the shipwreck in the Viet Nam National Fine Arts Museum in Hanoi see Nancy Tingley, Arts of Ancient Viet Nam: From River Plain to Open Sea, Asia Society, New York and the Museum of Fine Arts, Houston, 2009, fig. 10, p. 14, and for the materials at auction and background on the shipwreck see Treasures from the Hoi An Hoard, Butterfields, San Francisco, 2000. 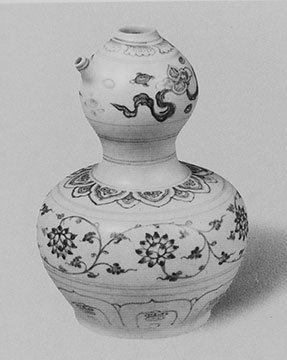 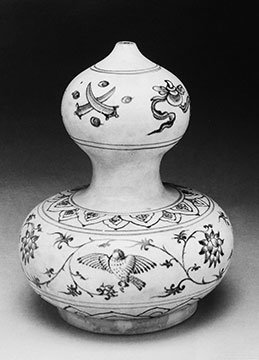 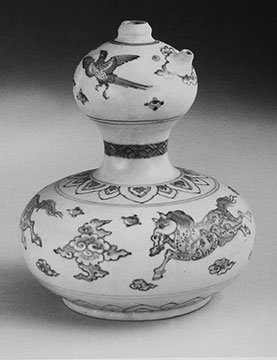 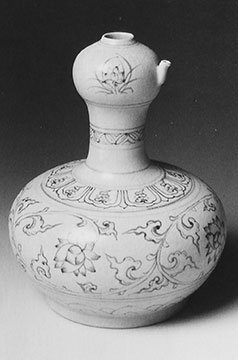