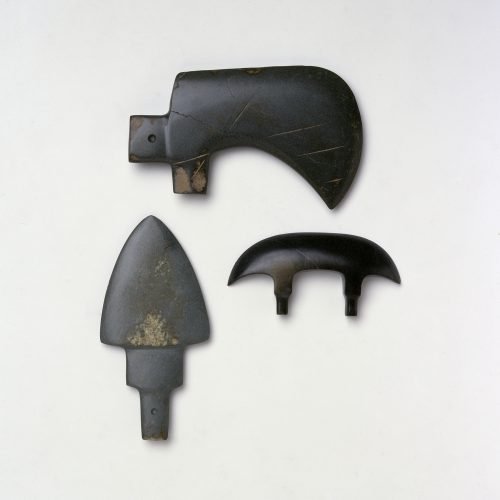 Illustrated here are three of a set of twenty-one stone implements all expertly shaped and worked, the surfaces polished to a satiny smoothness and soft sheen, ranging in color from black to greys to subtle shades of moss and gray-green, the shapes including daggers, spearheads, arrowheads, a variety of miscellaneous blades, axes and a hoe, created in emulation of metalwork suggested by such features as the median crests similar to those on metal blades, the small depressions which emulate the rivets on metal blades, and the projections from the sockets which seem to mimic the wooden shafts that would have been affixed to metal blades (fig. 1)

General similarities can be noted in the various shapes of these stones with bronze and iron implements associated with Vietnamese Dongsonian and other Southeast Asian cultures, as well as with late Zhou and Han period agricultural and hunting equipment from such southern provinces as Guangxi and Guangdong. Also noteworthy here is the migration of metal forms to stone, an extremely unusual direction but understandable if the stone objects were intended for ritual use and interment with the deceased, as presumably were the present stone objects that had been buried within the bronze bucket also on view in the exhibition (fig. 2). The vessel, with thread relief geometric designs cast on its thin walls, belongs to a large family of buckets found across a swath of northern Vietnam and south and southwestern China in contexts datable from around the 3rd century BC to the 2nd century AD. The vessels have been discovered in burials within Guangdong’s Nanyue kingdom in which such vessels were found to contain bone, turtle remains and shells. Cowrie shells were the main contents of vessels found in the Dian kingdom in Yunnan and in Dongson burials of Northern Vietnam the containers were found with both metal and stone implements. 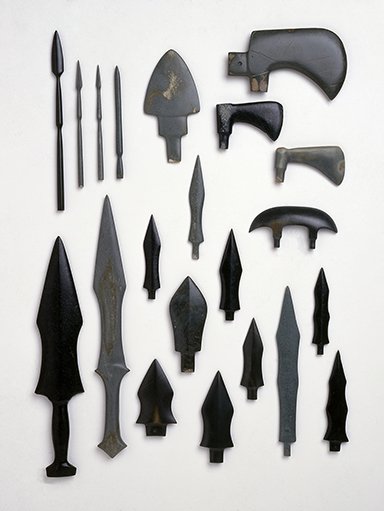 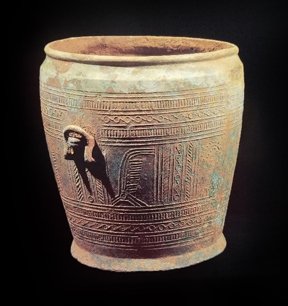