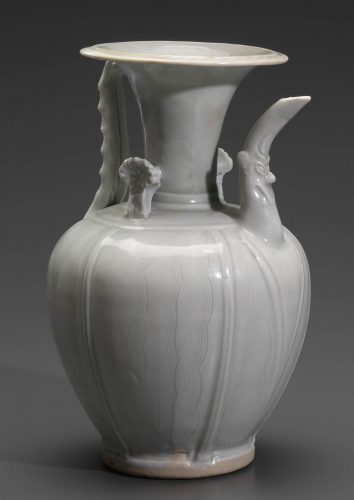 The ewer is of a usual and popular form but with various unusual decorative elements enhancing its basic ovoid shape. A long spout that curves high and a fanciful loop handle are set on either side of the ringed trumpet neck. The body is divided into six sections by vertical double grooved bands in relief and decorated with vertical wavy combed lines which stop at an undecorated, slightly raised collar encircling the neck. Double-grooved bands form a “V” under the spout. Two upright flattened tabs, with mold-pressed designs that look like stalks of broccoli, are attached to the neck with struts. The handle was given a very organic appearance through the presence of bamboo-like nodes molded on its upper side. The spout is molded with a small but very demonic face with curved horns, prominent nose and ears, and a long overhanging upper lip. Encircling the rim is a striated border. The glaze is an even, very pale blue with a slight greenish tinge, and where the casually finished foot and base are unglazed, the dense whitish ware, with a rather powdery feeling to the touch, is revealed.

The present ewer, which was at first unique in our experience given the strange configuration of the spout, does, not surprisingly, have at least one known mate, a ewer unearthed in 1998 at a construction site in Fuzhou city in Fujian province and published a decade after its discovery.1 The excavated ewer is attributed to the kilns located in Mingqing county in Fujian province, where imitation Jingdezhen wares were produced, some of exemplary high quality. The excavated example has a cup-shaped rather than flaring mouth and double loops on the shoulder rather than the decorative uprights of the present piece. However, other ewers with similar flaring mouths and related uprights are known, a number excavated in Fujian province.