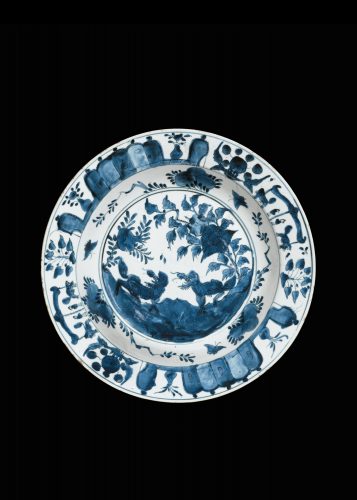 The large heavily potted dish is painted in cobalt of liquidy consistency and intense blue color revealed through a bright, clear, colorless glaze. The image of a pair of qilin clinging to an earthen bank is placed at the center of the composition, the ground unstable as if it were about to collapse or spin out from under them. These ruffians from some imaginary world bark at an oversized pomegranate on one side with an enormous peony plant swaying above them on the other. The cavetto features conventional subjects: peaches, butterflies and branches, while the wide flat rim bears a quite extraordinary design comprised of two rows of five bottles, each on narrow shelves flanked by vases of flowers and an additional bottle on each end. Between these unusual motifs are cursorily drawn canopies supported by lion figures, each sheltering a pair of small human forms and flanked by plants. The dish’s exterior was hastily painted in paler blue with two groups of bare branches emerging from the mouth rim. The foot is incurved, somewhat rough, and encloses a glazed base with chatter marks and a bit of sand adhering.

The nature of the porcelain material, the chatter marks on the base, the shades of blue and style of painting, as well as the bright, slick, clear glaze are consistent with so-called kraak wares, the underglaze-blue decorated porcelains made at Jingdezhen during the late Ming period, an immense production encouraged especially by European and Middle Eastern markets. However, what gives us most pause is the design on the rim, which is hardly commonplace within the sprawling, riotous world of kraak design. It is not surprising though that the unusual bottles that dominate the design on a piece intended for export to the West were based on a tankard shape originating in the West. A jar with similar underglaze-blue decoration and emblazoned with the Hapsburg emblem of King Philip II of Spain (r. 1580-1598) supports a late 16th or perhaps early 17th-century period of manufacture for the present piece, the heyday of these compelling Chinese porcelains.[1]