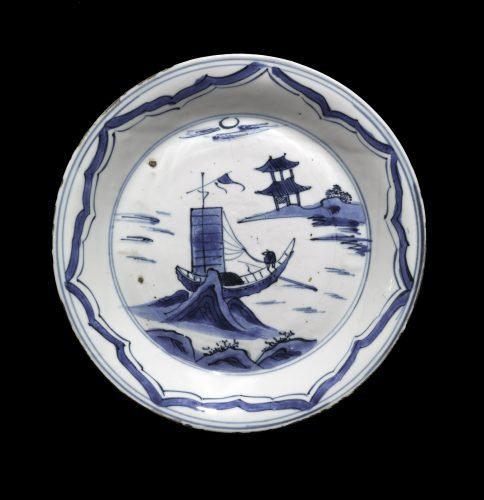 The thinly potted dish has a wide flat interior surrounded by a flared cavetto and lip. The dish is painted in underglaze blue on the interior with a sailboat moored on a rocky shore, the boatman bent over manning the sheets, a two-storied pavilion on a spit of land in the distance, with a full moon high above. The scene is enclosed by a double-line boarder and further with a prominent bracket frame on the cavetto with seven foliations, the outline comprised of a wide border supported by a single conforming line within and finished with a double line beneath the lip. Two tufts of grass issuing long stems decorate the exterior. The motifs were strongly outlined before the application of lighter and darker shades of wash. The cobalt blue color appears quite intense beneath the thick, transparent, bright glaze. Kiln grit adheres to the unglazed foot rim while the glazed base exhibits crawling and numerous pockmark-like holes. Glaze has flaked away from the lip rim, an effect known as mushikui, “insect nibbled mouth.”

This unusual dish is one of numerous instances of potters and decorators creating variety and even surprise in products made for export, in the case of the present type of ware, for Japan. Boats skimming lake or river waters or moored on banks were common subjects as were two storied pagodas while the two-tone blue applied in broad washes was also characteristic. Most extraordinary here, however, is the remarkable frame for the scene.

At least one other dish with this bracket-medallion decoration has been published. The dish was included in the groundbreaking exhibition devoted to kosometsuke organized by Julia Curtis, entitled Trade Taste and Transformation: Jingdezhen Porcelain for Japan (fig. 1). The technical features and firing flaws of the dish described in detail in the exhibition catalogue correspond with those of the present dish to the extent that one is tempted to conclude that they were made side by side. 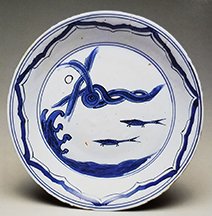