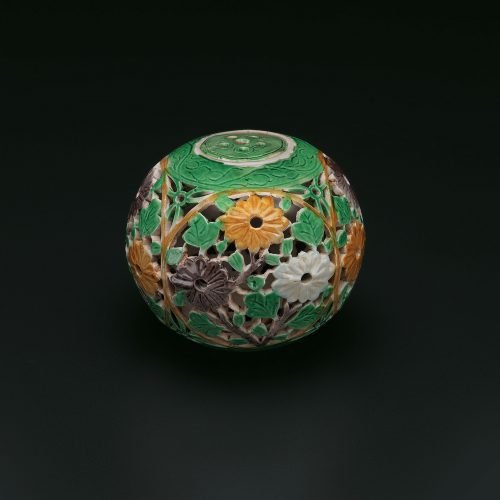 The spherical biscuit receptacle has a disk-shaped cover that fits perfectly into the recessed circular mouth. Of lotus pod form the green-glazed lid is pierced with five small circular apertures surrounding a sixth in the center where a knob, probably of cord or ribbon, would have been attached. Intricately carved in openwork, the body is decorated with four medallions which appear like large rings adjacent to one another, the perimeter of each colored yellow and each containing an aubergine, yellow and white chrysanthemum issuing from aubergine stems and surrounded by green leaves, the blossoms and leaves incised with appropriate details. Green openwork trefoil blossoms occupy the triangular spaces between the medallions at top and bottom and matching green bands incised with scrolls encircle the lip and base. The lower green band encloses a rounded yellow openwork floret on the base.

This small porcelain gem boasts ancestors of great antiquity in metalware, namely the openwork orbs fashioned from gold and silver by craftsmen of the Tang dynasty (A.D. 618- 907). Flora and fauna in beaten and chased openwork were formed as globes, constructed in two hemispheres, hinged, and with the hollow interiors fitted with gyroscopic mechanisms supporting shallow incense burning bowls, the entire construct normally suspended on a chain (figs. 1-2).

The Qing dynasty (A.D. 1644-1911) ceramic version is delightfully up-to-date with its gracious chrysanthemum decor and yellow and green color scheme, the color scheme popularized during the Kangxi reign era (A.D. 1662-1722) and referred to by dealers in the west as ‘egg and spinach.’ The decorative openwork design and colors here are amazingly close to the openwork lid of an earthenware incense box of the Liao dynasty (A.D. 907-1125) (fig. 3). The Liao yellow-green-cream color scheme was based on Tang-dynasty lead- silicate-glazed sancai (‘three color’) earthenwares. During the Qing dynasty, the ever-inventive craftsmen at Jingdezhen reintroduced that particular color scheme for decorating porcelain. It was a conscious revival and especially notable is the ‘splashed’ effect of some so-called ‘egg and spinach’ glazed Qing wares, imitating the lively sancai (‘three-color’) wares of the Tang (fig. 4).

A small ball-shaped porcelain datable to the first quarter of the 18th century A.D. , quite similar to the present, is characterized by openwork roundels containing blossoms and leaves but decorated with a fuller range of famille verte enamels. The openwork honeycomb ground tightly organizes the design, whereas in the present orb a more naturalistic feeling is achieved. Dr. Christiaan Jorg likens the ceramic orbs to the brocade balls associated with ‘fou dogs’–that is the leonine creatures made in pairs often as stone door or gate guardians with the female of the pair coddling a cub and the male frolicking with the ‘brocade ball.'[1] It is furthermore suggested that the Rijksmuseum piece was used as a cricket cage.[2] The present piece is about half as large and it is tempting to think that it served as a home for some minuscule creature that was a beloved Qing-dynasty pet, but more likely a potpourri of dried blossoms or fragrant leaves was its intended contents. 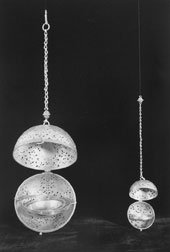 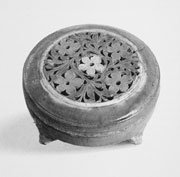 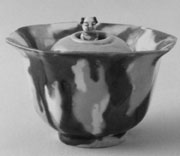 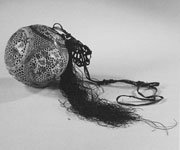