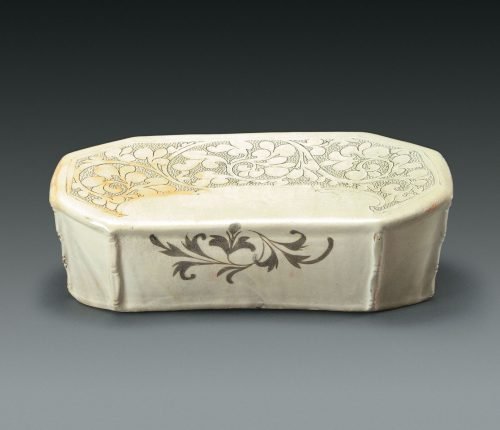 The stoneware pillow is of elongated octagonal shape, the facets divided from one another by vertical bamboo-form ribs molded in relief, the headrest and sides covered in a creamy-white slip before the piece was decorated, glazed and fired. Slanting slightly forward, the top of the pillow was incised with plump scrolling foliate vines on a ring-punched ground. Enclosed within a double outline conforming in part to the pillow’s shape, this decorated area forms a scalloped arch over the plain area below, the area intended to serve as the actual head or neck rest. The floral decoration and ring-punch ground are infilled with a black slip to maximize contrast with the creamy white color, while black was also used to paint the stem, blossom and trefoil leaves on the front of the pillow. The pillow is covered with a transparent, colorless, and bright glaze, while the base, randomly splashed with the white and black slips and the glaze, tells in brief the essential Cizhou story.

A great variety of shapes and immense range of decorative designs characterized the production of ceramic pillows at kilns located in several provinces north of the Yangzi, their wares known collectively as Cizhou or Cizhou-type wares. The pillows produced in this vast region during the Song (960-1279) to Yuan (1279-1368) period indicate an adventuresome clientele and inventive, creative and competitive producers. From the first transformational insight—that a slurry of watered down, clean, white clay could make the surface of a dark-clay vessel, implement, pillow or sculpture bright white, just like the fashionable white-bodied wares of the day—the future of these wares was all but certain.

After the first stroke of genius, advances were rapidly made that did ensure the success of these wares, advances that were purely stylistic ones. The first, in what would grow into a huge, long-lasting repertoire, was inspired by metalwork and hence the peculiar ground of tiny circles, the ‘ring punch’ ground also descriptively referred to as ‘fish-roe’ design, important in the silver and gold work of the Tang dynasty (618-907). Incising motifs through the slip was likely inspired by the chased or engraved designs on those same Tang- dynasty wares.

Such sources and associations were hardly foremost in the craftsman’s mind when producing this pillow, and were likely not even a distant memory. Ring-punch and incising were effective methods completely absorbed into the world of ceramic production and the items produced through these methods remained popular even as the range of pillow shapes and motifs grew. The techniques, therefore, very wisely, were not cast aside when newer methods were perfected and had become fashionable. On the present pillow, one of these later techniques, painting with a dark against a light slip, perhaps the most important in the Cizhou potter’s bag of tricks, was used to decorate the front wall beneath the rest. The inherent orderliness of the pillow top, reflecting a metal ware aesthetic, was very effectively combined with a freely brushed floral design, manifesting the natural rhythms of a Chinese painter’s hand.

An octagonal pillow constructed like the present, but decorated with a more naturalistic incised floral design, is attributed to the Jiaocheng kiln in Shanxi, shown here alongside the headrest of the present pillow (figs. 1-3). A bean-shaped pillow with related decor has been attributed to the Jinnan kiln in Shanxi (fig. 4). Its base is marked by the same chaos of slip and glaze as the present (figs. 5-6), as are a good number of published octagonal pillows believed to be from Shanxi, for example, in the Yeung Wing Tak collection (fig. 7). 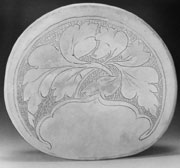 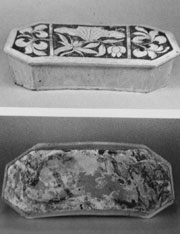