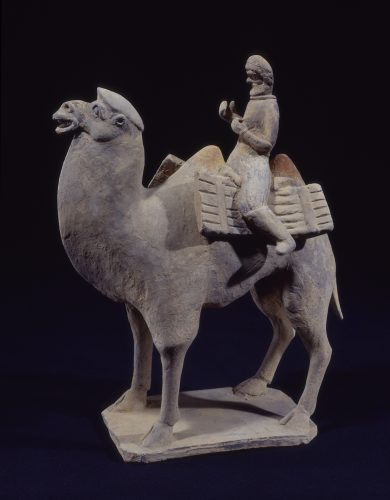 The two-humped camel, the sturdy hooved feet planted wide apart on a rectangular base, has a flat rump with long wide tail hanging straight, a powerful stout body, and a broad neck tapering to a sharp-edged midline. The small fur-capped head is raised, the mouth open and nostrils flared. The small delicately modeled cup-shaped ears, strongly sculpted cheeks and snout, and precisely detailed eyes contrast to the sleek smooth planes and curves of the body. Between the softly rounded conical humps the rider sits astride the saddle fitted with mock wooden frames. Heavily clad in long sleeved attire with rolled collar and long trousers tucked into the high boots, the rider holds his arms close to the body, each hand pierced to hold reigns. A skull-hugging cap is pulled tightly over the thick curly hair, the face modeled with deep-set eyes under heavy brows, a large pointed nose, sunken cheeks, the mouth slightly opened above the thick beard. The underside of the camel is completely open exposing the relatively thin walls and hollow interior. Some red-orange pigment is still is present on the camels humps and traces of white are visible on the bodies of both camel and rider, both figures a dark grey earthenware.

During a brief span of just over twenty years the Northern Wei collapsed, the Western and Eastern Wei both rose and fell, and the Northern Zhou and Northern Qi did the same. It is thus easy to see why we are sometimes hard put to say with certainty that an object we know to be of the period of these northern dynasties was made under one dynasty rather than another. The expressively featured face of the rider, that of a westerner rather than an Asian, appears vintage Northern Wei as do certain features of the camel. However, camels from tombs of the Northern Wei are also distinguished from the present by their smaller heads, arching necks and sometimes more carefully modeled and narrower legs.[1] Here the more columnar and block-like form of he legs, the smooth uninterrupted planes of the creature’s hide and the rather more naturalistic proportions which contrast to the attenuation noticeable in creatures produced during the late Northern Wei period suggest a somewhat later date of production.

A very close relative of the present camel was in fact discovered in a tomb of the Eastern Wei–the dynasty that fell heir to the eastern half of the Northern Wei kingdom in 535 A.D., and was predecessor of the Northern Qi under whose sway the style developed to new heights and extremes.[2] In the time line of dynasties and sculptural styles, it would appear, then, that the present camel and rider are transitional between the Northern and Eastern Wei dynasties.