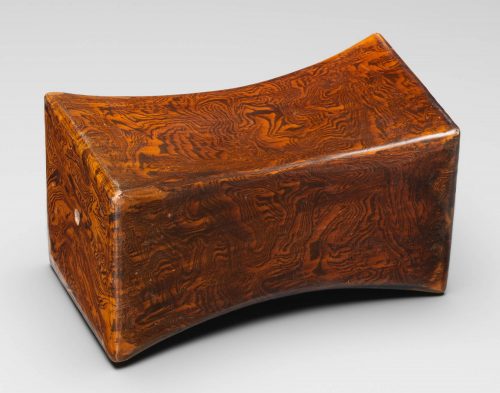 The ingot-shaped pillow was slab built with four slightly dished and incurved sides and two flat, square ends. One end was pierced with a hole to insure success in firing; the opposite end has three small marks from the spur supports that held the pillow upright during the firing. Each side was applied with a thin layer of marbled clay formed by combining two clays, one of a lighter and the other a darker color. The pattern, which looks like wood grain or even the markings of a tiger’s pelt, is enhanced and the surface given a great richness and depth by the bright, smooth, amber-colored glaze which covers the pillow overall.

Marbling was a technique used in ceramic production in China since at least the late 7th or early 8th century, suggested by material from datable Tang dynasty tombs, city, and kiln sites in northern China. Among the various methods used to produce marbled wares was “sheet marbling” in which marbled clay was cut into thin slabs which were placed over plain clay, as in the case of the present pillow. The size of the present pillow is unusual, larger than the Tang-period neck and wrist rests that were frequently produced as marbled wares and yet smaller than the usual Song to Yuan period headrests. It is not surprising though that a range of pillow sizes and shapes were required given the great number of functions they served. A pillow from the Hoyt Collection in the Museum of Fine Arts, Boston, a rectangular pillow described as having a top incurved and bottom slightly arched, a semi-ingot form, is marbled and coated with amber and green glaze.1 This appears to be transitional between the Tang and later pillows and is attributed to the 9th-10th century, a reasonable assessment and attribution for the present pillow as well. Marbled wares have been excavated at kiln sites in Yaozhou in Shaanxi, Shouzhou in Anhui, and Gongxian in Henan province.