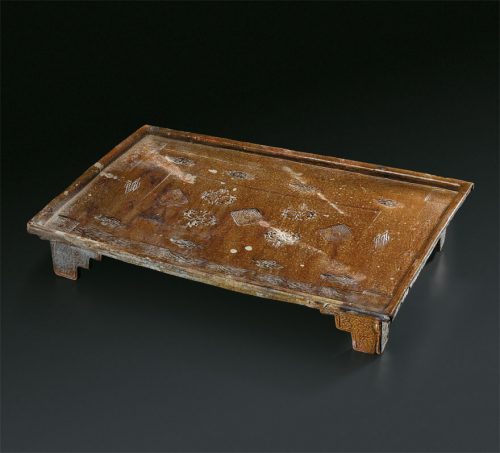 The low rectangular table is supported on four bracket-shaped feet, the table top enclosed by a raised edge, and the surface decorated with impressed or stamped geometric and quasi-figural designs. Ten chevrons are spaced out to surround a linear rectangular frame which encloses the central decoration comprised of two pairs of tridents, each formed by a pair of dragons with necks arching to either side of a central axis, the necks supporting heads with mouths agape, and the axis terminating in a small trident-form finial. The pairs of tridents are flanked by diagonally oriented square panels with a third between them in the center of the table, the squares each containing four geometric petal-like motifs radiating from a central circle. A wide band of linked diamond-diaper motifs decorates the periphery of the table top, each corner punctuated by a large square that repeats the designs of those in the center. The top of each leg bracket is decorated with a deer on one side and a bird on the other in molded thread relief. A thin irregularly colored amber glaze covers the top and sides, some areas exhibiting richer toned streaks, and with some degradation of the glaze present also on the underside of the table.

Although tables are not the most commonly seen Han-dynasty mingqi in collections outside of China, they are not uncommonly found in tombs of the period. Among the more recently published finds is a green-glazed earthenware table discovered in an Eastern Han dynasty (A.D. 25-220) tomb in Nanchang in Jiangxi province (figs. 1-2) and another unglazed earthenware table from Chongqing in Hubei province, which is also believed to date from the later Han period (figs. 3-4). One of the rarest finds, this again from within the Chongqing area, was a bronze table (figs. 5-6) while the most ambitious of these Han- period furnishings were fashioned with wooden cores and coated with lacquer. Such lacquer is sometimes discovered in good condition. Otherwise, the objects require restoration and conservation, time-, effort-, and expense- consuming tasks that are both an agony and a joy in which to partake. A pair of lacquer tables from the Xin dynasty (A.D. 9-23), one of them illustrated here (fig. 7) received such care at Kaikodo and while it was impossible to return these tables to their original state, they have been stabilized and saved from certain demise.

Such lacquer tables, or perhaps even domestic wood tables, would have been the models for the present type of ceramic furniture, while lacquer earred cups were the models for those produced in earthenware or bronze and sometimes found with such tables (figs. 7-8). Lacquer tables were commonly fitted with bronze hoof-shaped or cabriole-shaped legs and ceramic tables with bracket-form legs, while a compromise between the two is seen in a table in a private collection (fig. 9). An earthenware table excavated in Henan province is fitted with short legs in the form of crouching bears, a very common motif of the period (fig. 10). The bracket-shape of the present table, however, was a simple solution for producing the legs and also further opportunity for decor, as seen here in deer and bird motifs.

Lacquer also provided a scheme for the decor on the present table. The Kaikodo table and excavated Western Han lacquer example illustrated here are designed with central rectangular fields and wide peripheral boarders as seen in the present ceramic table (figs. 11-12). The chevron pattern had already become a common textile design and utilized throughout the Han in the applied arts (fig. 13). The central and corner motifs—shaped as squares infilled with patterns—are fairly commonly found on ceramic architectural elements, and more rarely on stone, in Han tomb art, a rubbing shown here next to a detail of the present table (figs. 14-15), while the dragons combined with trefoil designs in the central panel here (fig. 16) bring to mind a design on the famous painted shroud from the Western Han (206 B.C.-A.D. 8) tomb at Mawangdui in the suburbs of Changsha, Hunan province (fig. 17).

The amber-colored glaze actually gives this table the appearance of wood and we might also note that the character of the glaze—its irregularity and muted color—indicates a relatively early date in the development of lead-silicate glazed earthenwares of the Han dynasty, around the end of the Western or very early Eastern Han period. 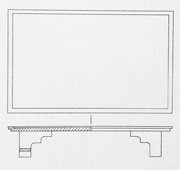 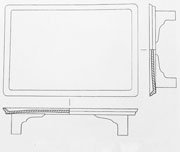 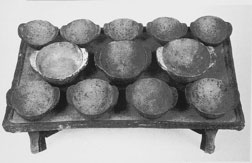 Fig. 11: A view of the lacquer table top at Kaikodo. 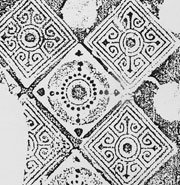 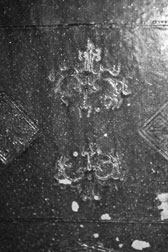 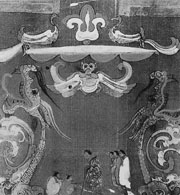