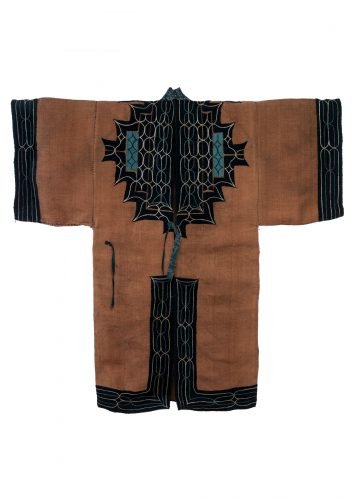 The coat falls in straight lines from the shoulders to the hem with the square-cut sleeves attached at right angles to the body of the robe and with the opening in the front. Woven on a loom with fibers from the inner bark of an elm tree, the coarse fabric is a light, natural-beige color. Indigo-blue cotton appliqués cut in simple geometric forms were laid down in complex maize-like arrangements on the chest and the upper back, with several light-indigo or sky-blue rectangular appliqués interspersed with the dark blue. Dark-blue strips were applied to form borders at the ends of the sleeves and at the hem. The appliqués were embroidered overall with white and sky-blue chain-stitched repeat linear patterns of ovals, circles, and bell and heart shapes. The collar is a floral-patterned blue-and-white cotton, while the ties in front are tie-dyed cotton.

The name Ainu brings to mind the harsh wintry climes of northern Japan and a livelihood squeezed out of the rugged land, the rushing streams and rough coastal waters by fishermen, hunters and gatherers, with bear and deer swarming in dense forests and salmon leaping up endless tumbling rapids. The land and waters, however, provided much more: the foundation for a culture impressive in a wealth of traditions, with a vast storehouse of oral narratives and epic poems memorializing history, legend, and life’s lessons, driven and spiced by music, song and dance, and a daily life supported and challenged by the spirit world permeating every corner of the here and now. It is not surprising that the Ainu people also plucked from this bounteous nature the skins, fibers, feathers and fur for their attire, for work and play, for festive gatherings, for solemn rituals. At the center and core of ritual life was that called “sending spirits back.” The gods of the endless pantheon were manifest in everything, and in gratitude, when the appropriate time arrived, they were released and “sent back.” The ceremony for “sending back spirits of bears”—deemed central to the ethnic identity of the Ainu, is embodied in the haunting image below of Ainu men, the bear by their side raised since infancy for the privileged journey back to the world of the divine, the Ainu officiating in traditional dress.1

Their coats descend from the traditional style represented by the garment here made from the inner bark of the elm that was collected and prepared for weaving by Ainu men. Lime or linden tree fibers, harvested and prepared like the elm, and nettle plant fibers were also woven for clothing and used as embroider y threads whereas the cotton appliqués and floral-printed tie-dyed fabrics were of Japanese origin acquired through trade. The weaving of the fabric, called attush by the Ainu, along with the construction of the clothing and the embroidery, was the Ainu women’s domain and the art was passed down mother to daughter, generation after generation. Although there were no structural differences between garments intended for males and those for females and the size of a garment, aside from length, was of no concern to them in their work, there were considerations that were of crucial importance: “An Ainu woman put her soul into each stitch as she made a garment because it was thought that a garment made without purpose would not have a soul. The most important thing to know before beginning a new garment was who would wear the clothes…”2 And of great import was the creation of an innovative design which “differentiated women’s skill: to decide on a design never produced before and choose the material and colors for it, the seamstress contemplated all aspects of the person who was going to wear the garment and visualized the person as he or she wore it…It was this process that elevated an Ainu garment to wearable art.”3

While at first glance the garments look much alike to us, each has its own twist, literally. Even amongst robes that are closely comparable to the present—they are typical of garments attributed to the 19th century by way of limited color scheme, patterns, materials, and workmanship—there are slight differences, but important differences nonetheless to the Ainu (compare, for example, the designs in figs. 2-4). It might be noted that the square cut of the sleeves is similar to the traditional kimono of Japan but is not as commonplace in the world of Ainu robes as the tapered sleeve illustrated here in an example in the Metropolitan Museum of Art (fig. 3). The particular style of attush robe illustrated in these examples was the preserve of the Ainu of Hokkaido; those inhabiting the Kurile Islands and Sakhalin had developed their own expressions of Ainu identity, also apparent in their wardrobes.

The designs—the same found throughout Ainu arts and crafts—were more than mere decoration on the coats. They were intended as protection for the person wearing them. This was accomplished through the specific placement of the appliqués and embroideries at openings vulnerable to intrusion by demonic forces, at the neck, sleeves and hems. However, the motifs themselves were accorded no “meaning.” Aside from the hear t-shaped and other motifs with conspicuous “points” that are defensive “thorns,” protecting the corners or “flames” of the maize-like arrangements, it is claimed by the Ainu themselves that it does not go beyond that. Whatever names or terms used to refer to a design, they are simply descriptive, even if we desire to eke something more meaningful from them.

These non-representational designs with their special rhythms and harmonies, however, cannot help but draw us back to a Neolithic Jōmon aesthetic, where we began this exhibition. The compelling artistic link between the two cultures appears to run far deeper: it is widely believed that Ainu origins can be traced back to the Jōmon people and culture. We usually think of Jōmon, which had its beginnings around 10,000 B.C., as occupying a remote past and a geographical domain that was widespread across Japan. However, although the culture disappeared in greater Japan when the forerunners of the Japanese nation as we know it came upon the scene and began their trek to the present, the Jōmon survived well into the present era in Hokkaido, where one primary group of Ainu was to emerge. The path between Jōmon and Ainu was not simple. Although it passed through the peoples supplanting the Jōmon in Hokkaido in pre-Ainu times, the path or line connecting Ainu with Jōmon was not broken. The strongest proof of a relationship is provided by physical anthropologists and evidence derived from dental and skeletal studies. Art historians make their contribution, on the other hand, by putting one of their ‘wonders of the world,” a Jōmon pot, next to clothing that has been elevated to “wearable art,” an Ainu coat, and letting the sparks fly.4

1. Fosco Maraini (1912-200 4), ethnologist, explorer, filmmaker, professor, writer and photographer, was illuminator extraordinaire of Ainu culture. We thank our photographers and dear friends John Bigelow Taylor and Dianne Dubler for providing the photograph of the Ainu that was taken by their friend Fosco.

4. The book written by Fitzhugh and Dubreuil, along with numerous illustrious contributors, is a most important source—one relied on gratefully by the present writer—for all things Ainu. Amy Poster (see the David Newman tribute above) and Fosco Maraini (see the Modern Ainu photograph) contributed important chapters to that comprehensive tome. 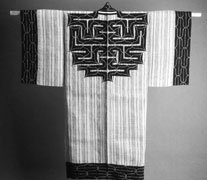 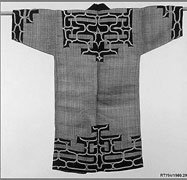