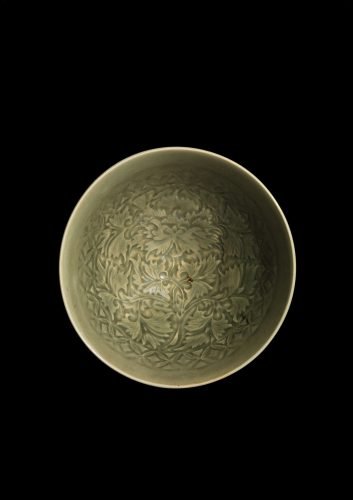 Of deep conical form the bowl was skilfully molded on the interior with a crisp, complex image of a single large peony blossom amidst a profusion of leaves botanically appropriate to the flower. The peony, with its layered petals frilled at the edges and minute veins clearly rendered, rises from a single slender stem to fill the upper reaches of the composition while intertwined offshoots issue leaves that spread their lush tri-lobate forms to fill completely the circular ground. A diaper border that can be read as a cash or four-petalled f lower pattern encloses this main area of decoration below a plain rim. Sharp spokes sliced on a diagonal radiate from the foot to an incised line below the mouth rim on the exterior of the bowl as if swiftly cut with a knife to produce the appearance of the multiple petals of an opened flower. Covered inside and out with a bubble-suffused olive-green-colored glaze, the decoration is enhanced by its multi-colored appearance, dark where accumulated in the deep crevices of the design and lighter on the higher ground of the decor. The unglazed foot reveals the dark grey stoneware body and the glazed recessed base has a narrow border of orange discolouration around its circumference.

While the talents of Song-Jin period (A.D. 960-1279) craftsmen at kilns in Yaozhou in Shaanxi province resulted in a vast range of ceramic products, their signature wares were celadons, traditionally known in the west as Northern Celadon but in recent times referred to as Yaozhou ware, Yaozhou in Shaanxi province being their major production site. Although undecorated wares comprised the primary style of the pre-Song celadons produced there, in which shape and glaze carried the aesthetic message, wares decorated with carved or molded designs were especially successful in catching the fancy of patrons from the Song dynasty onward. As the ware grew in popularity, so too did the necessity for volume production and the use of molds facilitated high productivity.

The molded wares produced at the Yaozhou kilns are distinguished, in the best quality wares, for the sharpness, clarity, and multi-dimensional appearance of the images. This resulted in part from the expertly crafted molds that allowed for the production of images with sculptural depth. A polychromatic effect enhancing the deep relief designs was also made possible in the fired ceramic. The glaze would naturally f low to, land at, and accumulate in various levels depending up on t h e angle and depth of carving. The celadon color would then range from dark to light depending upon the depth of the glaze. Given the accomplished techniques for carving clay at Yaozhou kilns, it is not surprising that the creation of molds would have come easily and naturally to the craftsmen working there.

One of the most popular subjects in both carved (fig. 1) and molded (figs. 2-3) wares was the peony. The mudan, or tree peony, was to Song dynasty Chinese what tulips were to the Dutch. There could never be enough and nothing was spared in cultivating them. The “King of Flowers” symbolized beauty, wealth, honor, and love. What more was there? The great Northern Song scholar Ouyang Xiu (A.D. 1007-1072) was moved to write a treatise on the f lower, discussing cultivation, varieties and nomenclature, touching on its history, legends, and role in society. Other treatises followed on both the mudan (tree peony) and shaoyao (herbaceous peony). Whereas Yangzhou was the center of shaoyao cultivation, Luoyang in Henan province was the center of propagation of the mudan, and the market for the flower and accessories, objects, paintings, and accoutrements with the peony as subject was vast. Realistically or naturalistically portrayed peonies that captured the true essence of the f lower are well known in the art of the Song period and later. The peony remained central to the arts, flourishing in a horticultural garden of motifs even as that garden continued to expand over time.

The design of the interior here is indeed quite naturalistic in feeling while the artist still contrived some symmetry and balance to serve compositional needs. A strong sense of naturalism exists not only in the suppleness of the leaves that are portrayed with the deep lobation of an actual mudan leaf but also in the chaos of the growing foliage and its density. However, while the peony is ubiquitous in the decoration of the celadons of the north, and popular in the decoration of other wares as well, the cash motif is not. The design, called a cash design since it can be read as Chinese coins when viewed one way, can also be read as a chain of four-petalled flowers. Several examples exhibit how this motif was used to support a primary design on the interior as in the present bowl but also used more prominently on a vessel’s exterior (figs. 4-6). The last bowl illustrated here bears a date corresponding to A.D. 1162 and therefore supports the dating of this group to the Jin period. 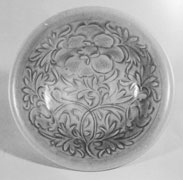 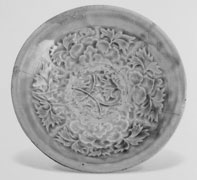