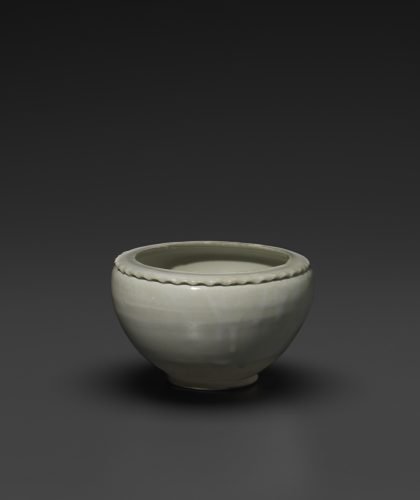 The gently bowed sides of the deep bowl rise from a wide-rimmed foot to an incurved expansive mouth edged with a wavy or “piecrust” collar. The bowl is covered with a thick white slip beneath a bright, glassy bluish-white glaze, falling in large drips especially on one side, and stopping well above the foot. The compact and refined white stoneware is revealed on the unglazed portion of the body, foot and recessed base that is marked with encrustations.

This well-known 10th-century white-ware vessel type is characterized by the depth of the wide-mouthed vessel and the distinctive “piecrust” rim. Published examples are associated with or attributed to Hebei province, the hallowed center of white-ware production, which achieved great acclaim during the Tang through the Song period. A bowl excavated from the Dingyao site and dated to the Five Dynasties-early Northern Song period is closely associated in shape and also in the careful execution of the piecrust rim (fig. 1). One excavated in a village in Quyang, the area of the Ding kilns, was less successful (fig. 2). Among the extant and published bowls of this distinctive type, at least one other is like the present in every respect, not only including its slip application and cool-coloured glaze but the extremely well-articulated, exemplary piecrust rim (fig. 3). The Kai Yin Lo collection attributes this piece, and another in the collection, to the Xing kiln, the center of white ware production during the Tang and producing at least into the Five Dynasties to Northern Song period in the 10th century.

The present piece with its slip coating and cool-toned glaze suggests the possibility of the Xing complex as the source for the piece. At some point the bowl travelled to Hong Kong where in 1994 it was bought by Kaikodo, then based in Kamakura, and from Japan was brought to the New York gallery prior to its opening in 1996. 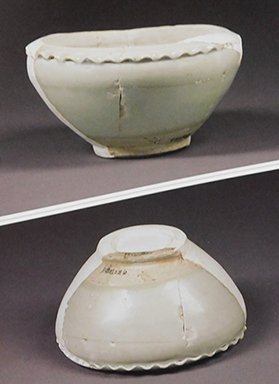 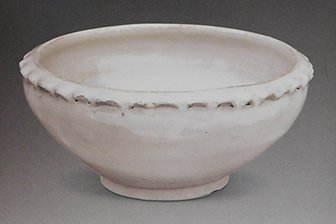 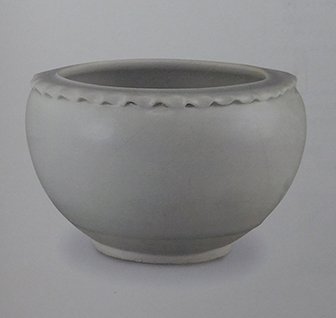