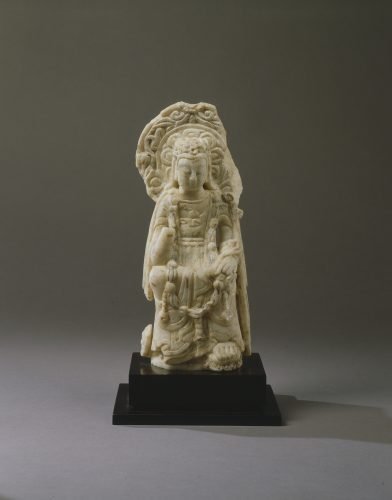 The Buddhist deity is carved in the round from marble, seated on a lotus pedestal in a pose of contemplation with the right leg crossed over the left knee. A halo of lotus petal lappets and scrolling budded vines form the mandorla behind. The oval face is carved in a meditative expression with the eyes cast down beneath arched brows, the hair parted in the middle and the headdress carved with a central trefoil and three small circular apertures to receive inlaid jewels flanked by swags of cloth. The bodhisattva wears heavy robes and a thick sash-like necklace with three strands of smaller beads above the hem, the bare left foot peaking out below. Long undercut scarves extend from the shoulder while the left hand clasps a lotus stem and only the forearm section of the right arm remains.

This small sculpture is a good example of the short duration of the Sui dynasty, or midnight before the dawning of the great Tang. The heavily and richly adorned figure exemplifies the Sui Buddhist “look” that gives way to the more human-gods of the Tang. While the features of the present sculpture are to a great degree geometricized, with features disproportionate rather than naturalistic, they do not approach the abstraction and ethereality of their predecessors of the late Northern Dynasties period. Nor, despite the solidity of the figure do we see the same sense of fleshy weightiness and musculature of its Tang-period successors. The present figure occupies its own space and that space is transitional, one between the spiritual and the human heart.