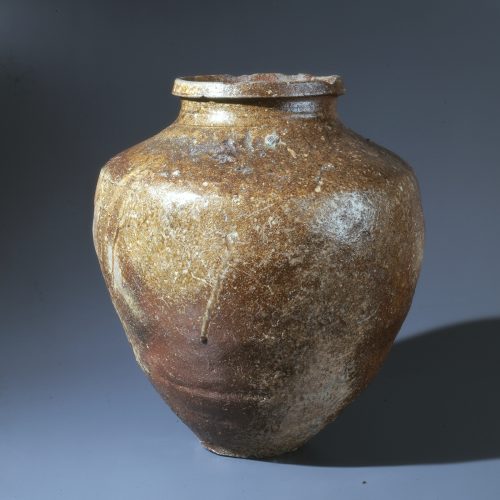 The massive coil-made jar rises from a narrow base, the body culminating in broad shoulders slanting to the short cylindrical neck, the mouth folded back, forming an overhang around the neck. The dark grey, coarse stoneware body is hidden beneath the olive greens, ambers and browns of an irregular, rugged glaze produced by fuel ash catching onto the vessel’s surface during firing. The shape is somewhat lopsided, indented low on one side but successfully righted by two balls of clay near the base that attached firmly to its surface.

This classic Tokoname jar was produced at one of the major centers of utilitarian ceramic production in feudal Japan. From the 12th century onward, the municipality of Tokoname in Aichi prefecture in central Honshu was the site of numerous kilns producing a distinctive stoneware while at the same time bearing some relationship to other contemporaneous wares servicing the agrarian community. The association between the Tokoname kilns and the Buddhist clergy is evident through the use of its durable vessels as receptacles for the sacred sutras, which were buried for safekeeping. However, many of the vessels that survive today carry the scars of a life in a rural environment, the dents, nicks and chips resulting from long use.

This imposing vessel here represents the hearty stonewares of medieval Japan that are unique in world ceramics. No two are alike because the method of construction and firing precluded that eventuality. They are, in fact, more like rocks or mountains with their own special terrain and like rocks and mountains, they were artless until, that is, they were “noticed” and adopted as something they were not meant to be. They were redefined to meet the requirements of a new clientele that had “discovered” them. What attracts us might have little to do with why the pots were made or how they were originally used. Rather we see them through the eyes of individuals living in a world devoted to tea and everything associated with it, individuals who embraced humbleness and naturalness as qualities to be esteemed and admired, qualities manifest in the present Tokoname jar.